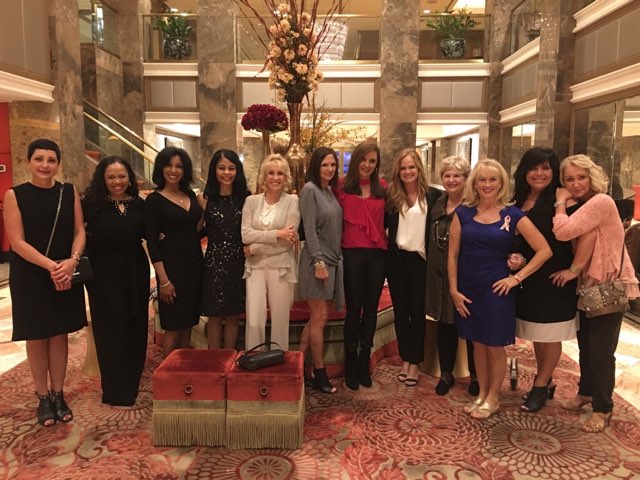 The Winthrop P. Rockefeller Cancer Institute at the University of Arkansas for Medical Sciences was one of the beneficiaries of this year’s QVC Presents “Shoes on Sale,” an event that supports breast cancer research and education.

UAMS has been involved with the event, which is hosted by QVC and the Fashion Footwear Charitable Foundation, for 16 years, Cory Leigh Taylor of the Winthrop Rockefeller Cancer Institute says. Taylor is the institute’s senior director of major gifts.

The institute was one of eight cancer centers that benefited from the Oct. 10 fundraiser in New York City, Taylor says. A group of donors from UAMS attends the benefit every year to represent the Rockefeller Cancer Institute, Taylor says. This year, 34 Arkansans – including an AY employee – went to the shoe-shopping event, where buyers hunted for couture shoes at reduced prices.

From its beginnings to 2016, QVC Presents “FFANY Shoes on Sale,” has sold over 1.9 million pairs of shoes and raised over $53 million for breast cancer research and organizations like the Rockefeller Cancer Institute, according to a news release.

Throughout the Rockefeller Cancer Institute’s involvement, the event has raised $6 million for breast cancer research in Arkansas, Taylor says.

Taylor says what’s especially important about the fundraiser is that it allows the beneficiaries to apply the money where it needs to go. The eight centers involved have been able to work together, too.

“Between the eight of us, we’ve formed some great collaborative work,” Taylor says.

For more information about the fundraiser or the Winthrop P. Rockefeller Cancer Institute, visit cancer.uams.edu/.