Until two weeks ago, I had no idea Oceans at Arthur’s menu included fried chicken tenders. So, after gaining this critical knowledge from a loyal reader who highly recommended them, I made it my business to schedule a lunch to see if, in fact, these were tenders worth raving about. You see, I am what you would call a bit of a fried chicken tender fanatic, and sadly, my favorite tenders went down with the Franke’s Cafeteria ship that closed after 99 years in business.

But the hunt for great tenders never ceases, and I am very happy to report that the ones at Oceans lived up to the hype, mainly because the kitchen staff didn’t take any short cuts with preparation. They are massive tenders, hand-dredged in flour and fried just right. The result is a meaty, juicy, piping hot tender that needs a few moments to cool down after it hits the table. Two come with an order, part of a Traditional Country Platter that also includes white gravy, a small salad, and sides of mashed potatoes, green beans, and corn. It’s a ton of food and all for $12.

These tenders were truly some of the very best I’ve had in the area, and while the accompanying white gravy was tasty, I found myself dipping each bite of chicken into the wildly addictive ginger dressing that came with my side salad. The mashed potatoes were thick and creamy with no shortage of butter, a hit by my standards. As for the biscuit, green beans, and corn? Not bad, but also not in the same stratosphere as the tenders. I would have preferred a fresher version of the beans, maybe lightly cooked in a little olive oil. I had the same sentiments about the corn, and I am guessing the biscuit was not scratch-made, although that is a lot to ask from a sushi-first restaurant. Again, not huge knocks, but if these side items upped their game a bit to match the awesomeness of the tenders and potatoes, then we’d be looking at something very special here. 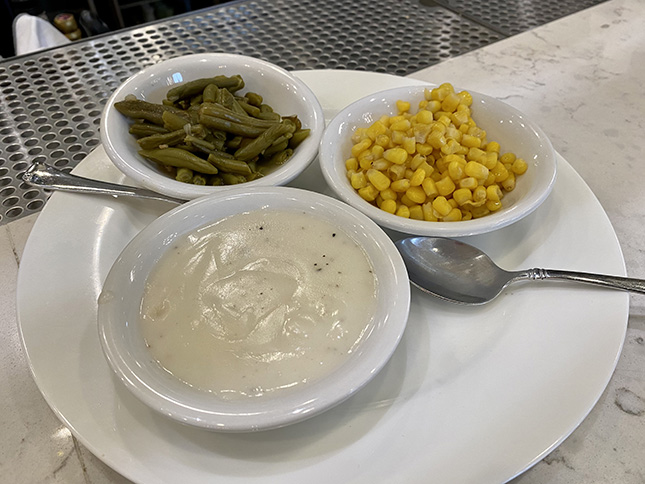 The fried chicken tenders from the Traditional Country Platter section of Oceans’ menu are without question worth checking out, but if you are not a die-hard tenders fans, just know that Southern fried chicken, chicken fried steak, fried catfish fillets, seasoned fried pork chop, hand breaded butterfly shrimp, blackened catfish fillets, smothered steak, and liver and onions, are also choices under the $12 platter.

With all that said, it’s hard to resist ordering sushi when at Oceans. I say go for it, like I did. Eat a little of everything, box up what is left, and enjoy the rest for dinner. Hey, there are worse things in life than having to eat Oceans twice in one day.

Kudos to the restaurant for broadening its menu. If you’ve not already tried the fried chicken tenders for yourself, it’s time to make it happen.

READ MORE: First Time’s a Charm at Bennett’s by Keith & Co. in Sherwood