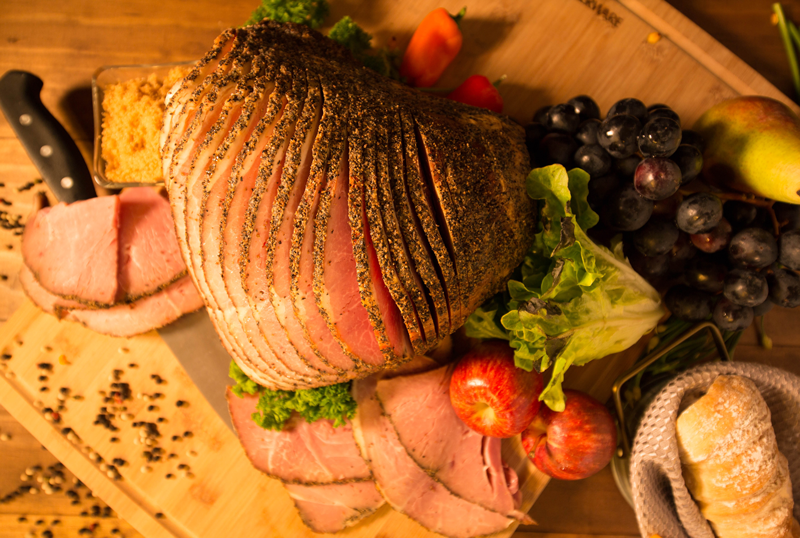 Arkansas’ culinary gifts of the season come in the form of smoked meats, delivered to your door.

[dropcap]T[/dropcap]oday, Arkansas’ food finds are a frequent gift opened by friends, families and business associates all across the United States. In particular, three Arkansas-based companies hog the market on these meats.

Coursey’s Smoked Meats in St. Joe has no website, no email address and no Facebook page — yet even in the 21st century when everyone’s on the Internet, this 72-year-old meat shop is still one of the busiest places you’ll find in Arkansas during the holiday season.

Mary Lu Coursey Neal has owned Coursey’s since 1991. She operates the smokehouse with her husband, John Neal, and she’s the third generation of the family to do so since it opened in 1945.

“My grandfather came here to retire,” she says. “He was a restaurateur who came here with my grandmother. He decided to open his own meat shop so people would stop in and talk with him.”

Lynn Coursey’s shop became a popular spot along U.S. Highway 65, the major link between Little Rock and Springfield, Missouri. With the boom of Branson as a tourist destination over the generations, Coursey’s became a destination along the route — a place to grab a ham or turkey sandwich or to pick up a package of smoked meat or cheese to take home for later.

“I trained with her father and I was taught to do it just this one way — and once I caught on, I realized it was a really good thing,” he laughs.

“This is our busiest time of the year, October through December,” say Mary Lu Coursey Neal.  “We only ship our bacon. All of our ham and turkey is sold at the store or in pick-up orders.”

John picks up where Mary Lu leaves off. “We have some companies that order two or three hundred packages of bacon to give as incentives to their customers. We send them coast to coast.”

Each year Coursey’s smokes 6,000 slabs of bacon, around 7,000 hams and close to 15,000 pounds of turkey breast. Even with those numbers, by the time the shop closes for the season right after Christmas, it’ll all be gone. “If we sold more than that, we’d have to produce more than that and expand,” he says.

For more than 45 years, Coursey’s has had a deal with Morrilton Packing Company (best known for Petit Jean Meats), which handles the start of the smoked meat process.

“They do it different for us than for everyone else they serve — taking Mr. Coursey’s recipe and process and curing the meat,” John Neal says. “We finish them here with rub and smoke. We smoke with nothing but green hickory wood — no chips or sawdust. We have a guy who cuts the wood for us. It’s all local wood and we do it in just one flavor: hickory wood.”

Coursey’s offers lots of smoked products, including bacon, turkey, ham, summer sausage, venison sausage, Swiss and cheddar cheeses, as well as house-made jams and jellies, local honey, peanut brittle and chocolate gravy mix. You can also pick up a ham or turkey sandwich or a turkey and cheese snack bag for the road.

But you can’t buy it online. If you want to order Coursey’s famous smoked bacon, you can call the meat shop at (870) 439-2503 and place your order via phone. Otherwise, you can have your order ready to go or choose what you’d like by visiting Coursey’s at 152 Coursey Road in St. Joe. 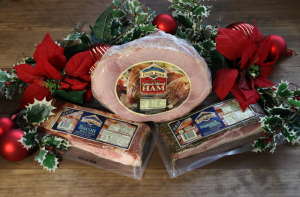 Coursey’s meats are cured at Morrilton Packing Company, which is best known for its ham, bacon and bright red weiners produced as Petit Jean Meats.

The Morrilton-based meat packer and producer now has a presence throughout Arkansas and in the Dallas metropolitan area, and its bologna, hot dogs, bacon and ham can be found in stores even across the borders of the state.

The connections to two prominent sports teams isn’t the only reason Petit Jean Meats ships so much Arkansas smoked meat out during the holidays. During November and December, the company will ship around 90,000 hams from coast to coast, along with gift boxes of bacon, smoked sausages and more.

Petit Jean Meats works from recipes that haven’t changed much over the past 50 years. The company was founded in 1926, when Felix Schlosser opened a meat market with Ellis Bentley in Morrilton. Two years later, Schlosser bought out Bentley and, after rebuilding from a fire, opened the Morrilton Meat Market and Sausage Factory. For the most part, the smoked bone-in and boneless hams and smoked and peppered bacons haven’t changed since then, with hams being cured and then smoked over hickory for more than 16 hours.

While Petit Jean Meats offers many varieties for its signature gift boxes, a new option has become one of the operation’s bestsellers.

“Our signature gift box, a half spiral ham with regular smoked bacon and our peppered bacon, has become a favorite,” Wilbanks shares. “Our breakfast box — the one with the coffee cake — is also very popular.”

One of the best things about Petit Jean Meats is how quickly an order ships.

“We try to ship within two days,” Wilbanks says. “We ship on Mondays and Tuesdays so it will never sit on a truck over a weekend. Everything ships frozen with ice packs.”

This year, there are new items you can order or find in stores. Pork sticks are available online in two-pound packages. Another new product line — a selection of cheeses — is only available right now at some Arkansas-based specialty groceries.

Petit Jean Meat hams have received Internet attention thanks to being fully cooked and the unique packaging used for the product. You can actually heat your holiday ham in the dishwasher!

During the holidays, it’s not uncommon to see a line at Burge’s in the Heights separate from the diners who come for classics such as the Leftover Plate and a smoked turkey salad that’s better known as “turkey crack.” The line consists of folks dropping by to pick up their yearly turkey, ham, chicken or duck for their holiday tables.

Burge’s smoked turkeys have been an Arkansas tradition for more than half a century. Alden Burge started smoking meat in his backyard for Lewisville High School football games in 1953. His family bought the local Dairyette in 1962 and began to sell burgers, sandwiches and the smoked meats that eventually earned the Burge name fame. The Little Rock outlet was opened in 1974. Current manager Jeff Voyles purchased the Burge’s operation a few years ago.

Next year, there will be a third Burge’s to visit. Deanna Porter, a longtime employee, will helm the new shop near Acxiom’s campus off Dave Ward Drive in Conway.

“We were originally going to open in July,” Voyles says. “But construction was slow, and when we realized it was going to take some time we decided to wait and open it after our holiday rush. The Conway location should open in March.”

Each year, Burge’s ships nearly 20,000 packages, the bulk of which are smoked whole turkeys and turkey breasts.

Smoked turkeys, turkey breast, hams, bacon, ham steaks and gift boxes are all available on the Burge’s website, SmokedTurkeys.com. Those who want some of the other famed products Burge’s produces, like “turkey crack,” smoked chicken and ducks and the like, will have to visit the Little Rock store. Sides such as cornbread dressing, turnip greens with smoked bacon and giblet gravy can also be reserved.