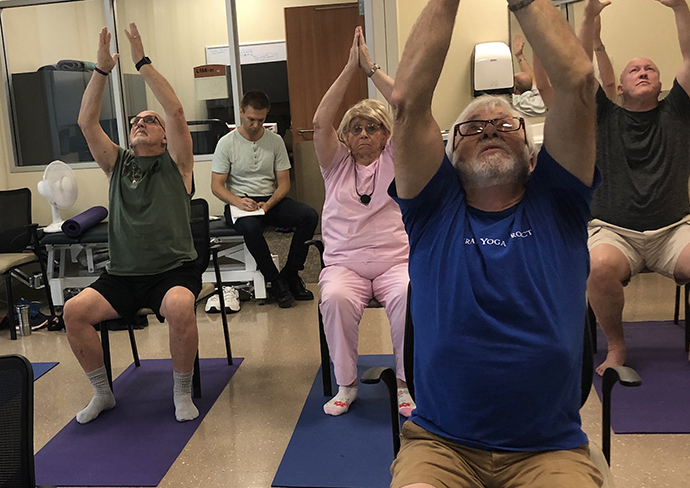 On a Friday morning, a group of men and women sit on chairs in a physical therapy room at the VA Medical Center in Fayetteville. Each veteran faces forward, resting their socked feet on rectangular purple and blue mats. At the front of a class, a 72-year-old man with shaggy white hair and a trimmed white beard leads them through a series of breathing exercises and gentle movements. In one, Lee Williams tells his fellow retirees to sit straight up and place each foot on each side of their mats.

He then reaches around to grab the back of his chair, modeling a gentle twist for others to copy. “I tried this the other day, and I want to see if anybody think it’s worth a hoot.”

For 19 minutes, Williams teaches chair-bound yoga poses like “cat cow,” which entails exhaling and inhaling while rounding the back and opening the chest, as well as “half pigeon,” where the foot of one leg is placed on the knee of another.

Williams then has his students, who include three veterans on live video teleconference, stand on their mats and go through a “downward dog” in which they put their hands on the chair sides and bend forward to stretch their hamstrings. At one point, a small black pug in the back of the room begins to bark. Lucy, a service dog, has seen another dog outside in the physical therapy treatment room. Her owner, Penny Bowling, stops stretching to pet Lucy and console her.

At another point, when the students lie on the ground for stomach and lower back exercises, somebody lets one go. “Foghorn!” cries student Conrad Baker, riffing on the flatulence’s sound. Williams gets in on the fun. “I think we have at least a couple Navy folks in here,” he jokes.

This is not the yoga of magazine covers, Lululemon ads or viral Instagram posts. Williams volunteer teaches a modified version to mostly senior veterans who want to feel better. The stated goal of the hour-long free class, held twice a week, is physical wellness. Other benefits are mental and emotional.

Williams believes the practice especially helps veterans suffering post-traumatic stress and other psychological issues. He often meets younger vets out in the communities and says he picks up on issues which may have not yet been diagnosed. “It’s in their eyes. You can sense it. You can see it.”

The pain is familiar.

Williams grew up in northwest Oklahoma and joined the Marines at age 17 in 1965. He was with the 1st Marine Division when it disembarked for Chu Lai and spent three years in the Vietnam War. As a radio operator with a command group, he didn’t often see direct combat. Still, he says he suffered “extreme stress” a few times, including when fired on.

Williams returned home, went to college, got married, had two kids and worked for 20 years as an electrician in Goltry, Okla. All the while, he fought demons. “There are things that I flash to,” he says, referring to traumatic events in Vietnam and in his civilian life. “I don’t really want to talk about them.”

In his first year back stateside, Williams drank heavily yet stopped when his kids were born. Through the decades, he also battled anger management issues. Even while rising in the oil and gas industry from instrument electrician to supervisor, he found himself prone to outbursts. “It took me 40 years to realize I was screwed up. I have issues,” he says. “I discovered it was wrong to shove people in the corner, threaten to rip their heads off and mean every word of it. So with me, just internalizing, after all these years, why did I do that? What is it that makes me do that?”

Williams hasn’t gotten an official diagnosis. He doesn’t know if he has PTSD. Whatever it is, “the symptoms are very similar.” What he knows for sure is the path to greater self-awareness began in 2011, when he began practicing yoga. That year, he and his wife Marzelle also moved to Bella Vista to be closer to their eldest daughter, Celeste Williams, who works as a nurse in the Bentonville area and has five children (two biological, three foster).

He at first saw yoga as a way to soothe extreme arthritis in his injured lower back. In the 1970s, while working, he fell in a grain elevator and landed back first on a ladder. Williams knew other veterans had similar aches and pains. He saw it almost every time he visited the VA Medical Center in Fayetteville. “I got to looking around at guys my age, and they didn’t look real good,” he recalls. Williams resolved to help other veterans, so he became yoga instructor certified in 2017. He also got permission from VA physical therapy assistant Amber Johnson to begin volunteer teaching a half hour yoga class every Monday.

It was around this point, after starting to teach, that Williams fully realized the mental and emotional benefits of yoga. Its emphasis on steady breathing and movements have helped clear his mind and understand himself better.  He says, “Through yoga, I have been able to focus and figure out some of my triggers that launch me like a rocket. When I feel a launch coming, I can feel the tightness in my chest, the shallowness of my breath and my heart rate starting to rise. I try to stop and breathe deeper, focusing on my breath — just breathe while the mind resets itself.”

Demand for Williams’ teaching at the VA grew so much that within months a Friday class was added. In early 2019, another yoga teacher, Jane Henson, also began teaching some classes. On top of that, broadcasts of the class began streaming to physical therapy-related classes in hospitals across the region.

These classes provide physical therapy and build camaraderie. Student Conrad Baker has enjoyed both. “There’s always that Navy vs. Army vs. Air Force thing, but we all want that common bond,” says the Vietnam vet, who served three years in the Army and four years in the Air Force. “We take care of each other.”

The class is part of a larger social scene at the VA involving other classes like tai chi and meditation, says Jean Nelson, the VA health promotion and disease prevention program manager. “You will see many veterans who come here and hang out just because they miss that connection. In society, people don’t understand them.”

Nelson, whose deceased husband was a veteran, serves as the VA staff liaison for Williams’ classes. She also participates as a student and has seen why his Friday class has more than tripled in size since spring 2018. “It’s him recognizing that look and just coming up and saying ‘It’s OK, man. You’re doing OK. What can I do to help you?’ When a regular attendee hasn’t attended class for a while, they will talk and Nelson will reach out, through the VA, to see if everything is all right. It’s calling someone who hasn’t come for a couple of weeks and saying ‘Hey, whatcha doing? You OK? Anything I can do for you?’”

Nelson and Williams want to do more for vets. In April 2019, a Saturday class on campus began specifically tailored to younger, working veterans recovering from post-traumatic stress and other psychological problems. It’s based on the program Mindful Resilience for Recovery and Resilience and includes practices chosen and adapted based on clinical and neuroscientific knowledge about PTSD and its treatment. It has been clinically tested, based on feedback from hundreds of vets and active-duty service members.

In spring 2018, Williams traveled to Colorado to learn the program as part of a weekend retreat organized by the Veterans Yoga Project, a non-profit organization supporting recovery and resilience among veterans, families, and communities.

Williams and Nelson believe the Saturday class will help working veterans who suffer emotionally and psychologically but can still function in society. Williams says after meeting working veterans of the conflicts in Iraq and Afghanistan, he often asks them if they have visited the VA. They usually have not “because they believe there are other people who are hurting worse than they are.” The younger vets tell Williams; “I’ll be OK, but those other guys, they hurt worse. I’m walking. I’m upright. I’m OK.”

Williams adds; “Someone should step forward and help them. The mindful resilience training will not heal them, but hopefully, it will bring them into a position where they can be mindful enough of what’s going on around them — and not go off the deep end.”

Williams and Nelson have also shared their desire with VA higher-ups for a weekday evening class.

All along, they rejoice in the students’ victories. Conrad Baker, for instance, had back surgery which left his head craning forward no matter how hard he tried to lift it. In spring of 2018, when he stood back to a wall and tried to stand upright, a full foot separated his head from the wall. Five months later, that was down to seven inches. Then there’s Melody Martin, who served in the Navy at Guantanamo Bay during the Cuban Missile Crisis. She was driving 52 miles to Williams’ classes from Proctor, Okla. They help her balance, she says, holding onto a walker. When she first began lessons, Martin could not get off her chair and lie on the mat, Williams later says.

Now she can. He smiles, his blue eyes gleaming through brown tortoiseshell glasses.

As is the custom in yoga, Williams always ends his classes on the mat. It is a place for rest after stress. At the end of a series of standing twists and folds, he tells everyone to lie on their backs.

The light dims. At the end of the class, Williams has them rest on their yoga mats, invites them to narrow their gaze or close their eyes. The sound of chimes, softly ringing, fills the room. “Breathe in and out,” he says. “Just breathe in and out.” A pause. “If you find you’re being carried away by thoughts of what you need to do next, just return to the breath.”

He continues; “Feel the mat beneath you as the floor comes up to support you, to keep you safe.”

Post-traumatic stress disorder (PTSD) is a mental health condition that’s triggered by a terrifying event — either experiencing it or witnessing it, according to the Mayo Clinic, a nonprofit academic medical center. Symptoms may include flashbacks, nightmares and severe anxiety, as well as uncontrollable thoughts about the event.

These symptoms can grip veterans who have experienced highly traumatic episodes during warfare or in training. Dan Libby, the founder of the nationwide Veterans Yoga Project, is a California-based licensed psychologist and yoga teacher who conducted the first epidemiological investigation of alternative medicine in VA PTSD treatment programs.

In 2018, Lee Williams was the only Veterans Yoga Project instructor teaching in Northwest Arkansas. In Little Rock, yoga teacher and veteran Wade Mary has also taught the practice to veterans.

Wellness Wednesday: The Impact of Dogs on Mental Health
July 21, 2021