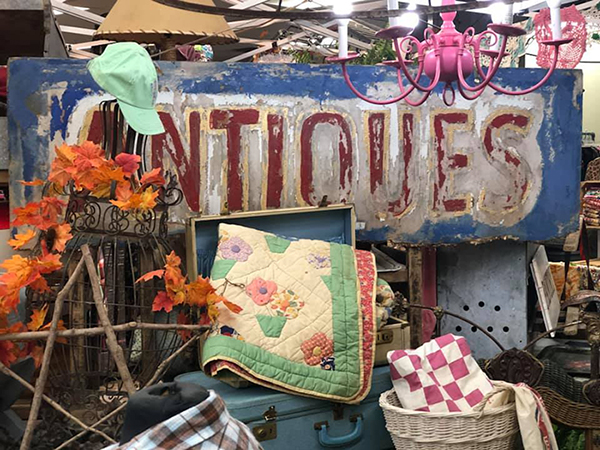 “One man’s junk is another man’s treasure.” Am I right?

Whether you are the serious antique shopper or the novice bargain hunter, ‘tis the season to find tchotkes, heirlooms and relics. This fall and winter, vintage seekers will have several opportunities to take their shot at organized treasure hunting at several antiques festivals.

First coming down the pike is the Bella Rustina Modern Vintage Market, presented by Ashley’s Finds. Interested antiquers will find a fascinating collection of more upscale antiques and vintage-styled pieces curated at more than 200 booths. The eponymous Ashley Norris of Ashley’s Finds has been showcasing her love of beautiful things since 2015. She says, “I’ve been a junker ever since I was a kid, and I started Ashley’s Finds as a way for my subscribers to find estate sales and auctions around Arkansas. From there it kind of snowballed, and now I run at least three events every year, two of them being Bella Rustina festivals.” 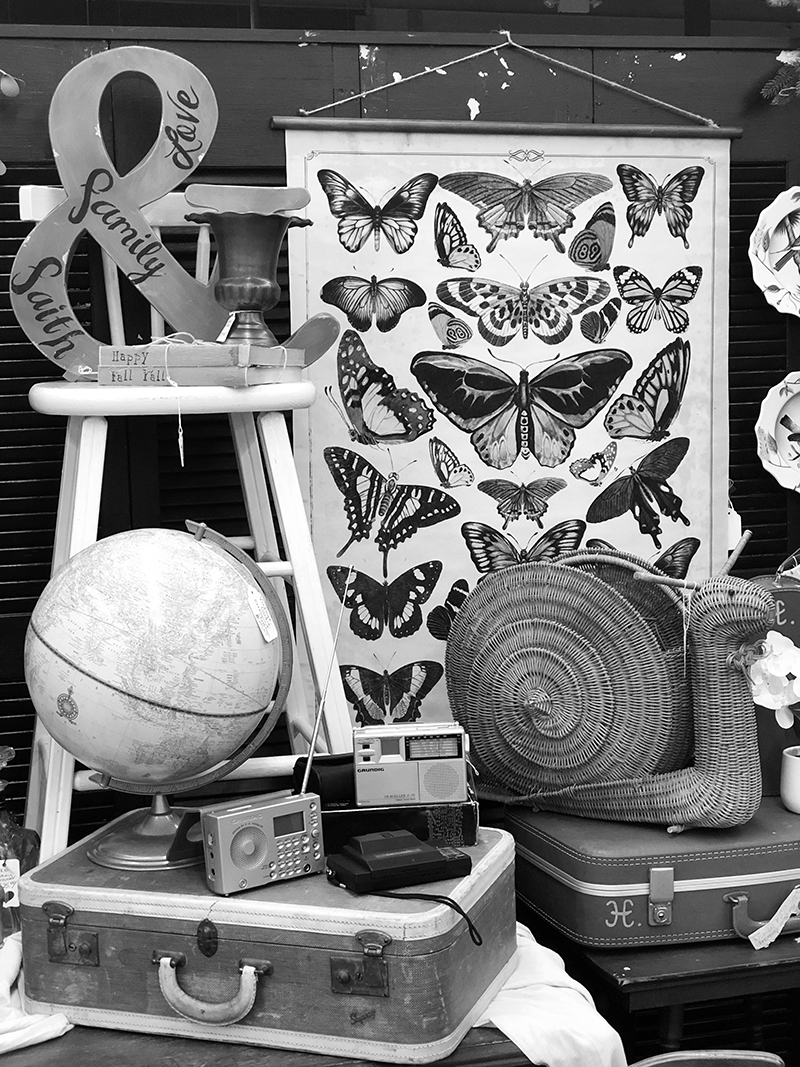 A festive oxymoron, Bella Rustina focuses on the future of antiques. “Bella Rustina is our more modern event,” says Norris. She explained that ‘bella’ is Latin for beautiful, while ‘rustina’ is a portmanteau of rust and patina. “[Bella Rustina] leans more into the farmhouse look and shabby chic, which are both currently very trendy in the vintage market,” says Norris.

The two styles are somewhat close but with significant differences. Shabby chic actually originated nearly 40 years ago across the pond as a response to the conspicuous consumption of then Prime Minister Margaret Thatcher; this superficial culture led many to eschew the expensive, ostentatious furniture of the time in favor of old, distressed pieces with a more authentic feel and history. 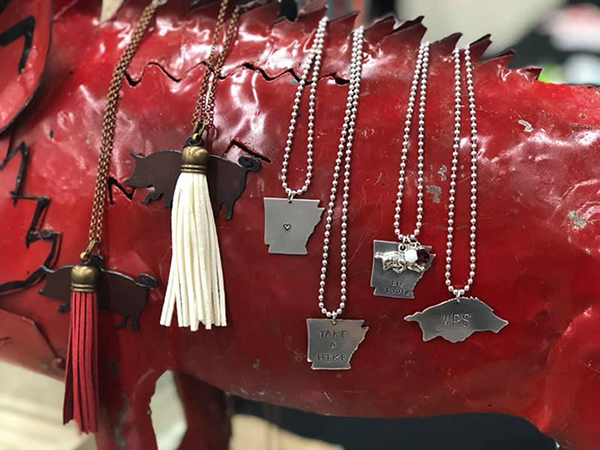 Shabby chic has since grown in popularity and in the United States is closely linked to upcycling; creatively re-using vintage furniture with chipped paint and scuffed corners, providing a home with the feel of a soft, lived-in cottage. Farmhouse style has a somewhat similar look and vibe, but distressed items aren’t as prevalent. Additionally, farmhouse has firm roots in rural America but has recently come into prominence through the stylings of Joanna Gaines of HGTV’s Fixer Upper.

Farmhouse style draws inspiration from the rustic practicality that governed the home furnishings and decor of generations of America’s farming families. Recreating that rural aesthetic in modern homes is the root of farmhouse style. While not quite as motivated by sheer practicality as its inspiration, farmhouse-style items should be hardy but still maintaining style and an industrial grace. Think sliding barn doors leading into a kitchen with modern, stainless steel appliances and a breakfast table with wrought-iron legs. It’s the juxtaposition that defines the trend. 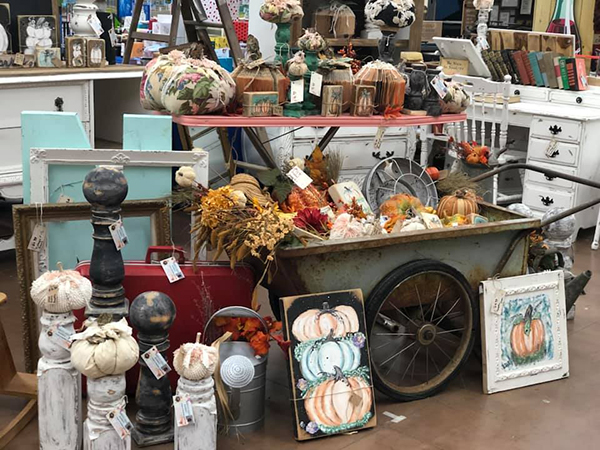 Shabby-chic and farmhouse-style furniture are abundant at Bella Rustina. “I’ve got one guy there who takes old chicken feeders and turns them into light fixtures and wall decor,” says Norris. “It definitely attracts a younger set than our other shows. There still are a lot of older people there, but I’ve been interested in seeing what these young people and our vendors do with this repurposed vintage stuff.”

The Bella Rustina Modern Vintage Market is November 9 and 10 at the Conway Expo Center. If shabby-chic isn’t quite your scene, Norris says there is another more traditional show January 11 and 12, 2020. It also will be at the Conway Expo Center. It is Antique Alley Arkansas which “attracts vendors and shoppers from multiple states to exhibit and purchase vintage items from the 1950s and earlier,” she says. “At that show, we have a lot of mid-century modern furniture, which is a minimalist style with clean lines and angles; it’s gotten popular too.” 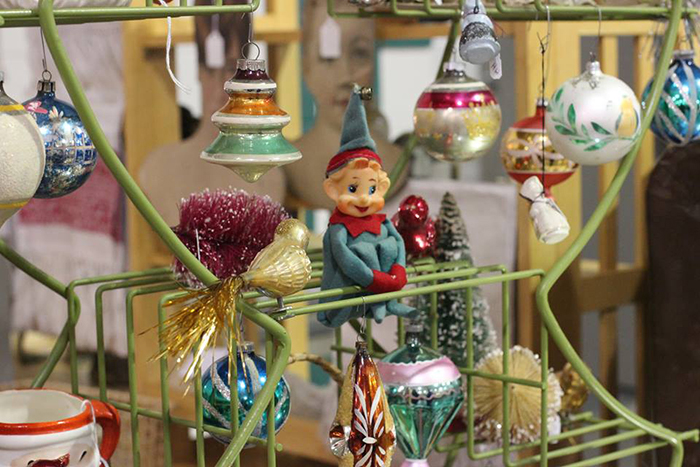 Antique Alley encourages its vendors to present authentic antiques, as opposed to Bella Rustina’s often vintage-inspired or handmade items that fall into the mix, but both are very popular, attracting roughly 6,000 visitors each. If it will be your first time at either, Norris has a few recommendations. “Wear comfortable shoes. You’re going to be walking a lot because it can take hours to go around and see everything on sale. Bring a friend, too. Antiques are more fun if you have someone to share them with,” she says. “Also, if you’re looking for furniture, bring your measurements ahead of time. You don’t want to have to run home halfway through and get them, because when you return, that piece might have walked off with someone else.”

Norris runs a very socially-conscious show. “A lot of the workers are from Renewal Ranch, which is a rehab facility around here. They work to raise money for when they leave,” she says. “Also, we have a lot of pieces from the Broken China Jewelry project, run by the Women’s Shelter of Central Arkansas. We give them a free booth,” referring to that shelter’s fundraising program, where they remake jewelry from broken china plates and cups, symbolizing both the damage inflicted upon and renewal achieved by the domestic violence survivors at the shelter. So far, this fundraiser has allowed the Women’s Shelter to purchase a new roof and transportation van. 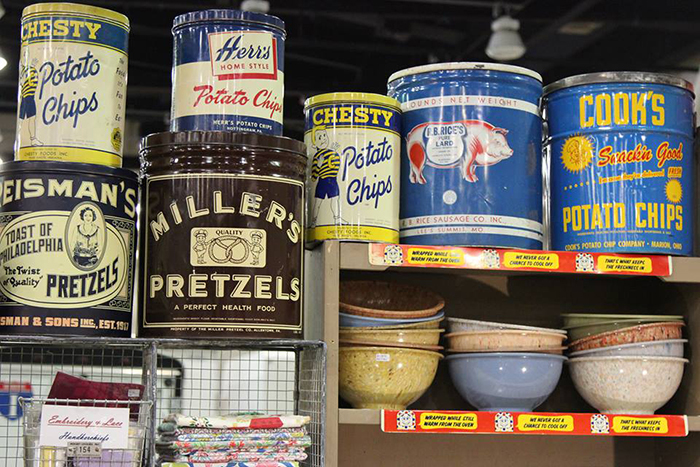 What about Norris’ favorite find at her show? “I’ve got this fantastic pie safe; it’s mint green, and I’ve never found anything else like it,” Norris says. For those unfamiliar, pie safes were used by Americans before ice-boxes, which is what your grandmother called a refrigerator, to store their pies and other perishable foods. They look like a chest of drawers. Like a food wardrobe. Hopefully, Norris uses her pie safe for other things. “The pie safe has an all-metal bottom, where you’d put in a big ice cube to keep everything cool. I keep it in my kitchen; it’s a really neat piece.”

I also had the chance to speak with Gail Kinney, the founder and promoter of the Heritage Event Company. She is currently planning the fourth-annual Antiques Festival of the Ozarks, coming to Eureka Springs on the weekend before Thanksgiving. Beyond Arkansas, Heritage runs antique shows in Oklahoma, Texas, Louisiana, Missouri and its home state of Colorado. The wide market begs the question, why Eureka Springs?

“There had been a longstanding show here, for probably over 20 years. The people running that retired, and the Best Western in Eureka approached me and asked Heritage to take over and do a show there,” explains Kinney. She further explained that both she and her vendors love Eureka Springs’ unique atmosphere.

Unlike Ashley Norris’ Bella Rustina, Kinney’s company emphasizes the importance of authentic vintage goods. “In the antiques marketplace, there are a lot of events that offer what you might call ‘vintage-inspired,’ but I just call it reproduction merchandise,” says Kinney, speaking about items that are made to look old but are actually mass-produced. “We don’t do that. People who come to our shows can count on attending a quality event that offers original vintage merchandise. That sets us apart, I think. That, and our fun, festive atmosphere,” she says. 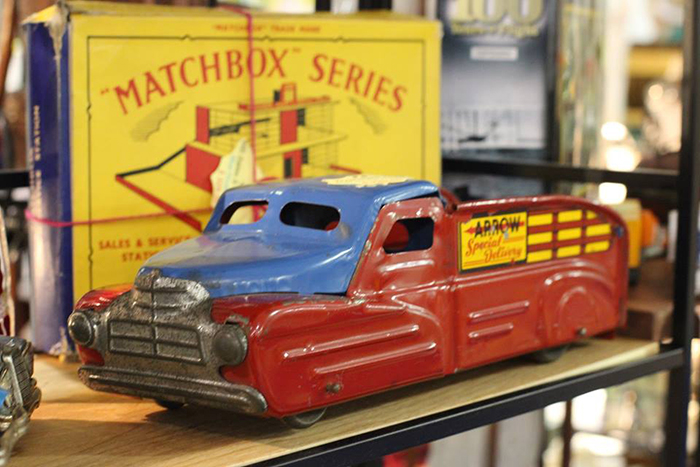 Kinney is also happy to attract visitors to Eureka Springs during the fall. “It’s just such a wonderful time to visit the Ozarks,” Kinney says. “That’s a big thing that makes this show unique; we really emphasize the beautiful scenery and the other places you might visit while you’re in for the weekend.”

Each year around 2,000 people make the winding drive through the Ozark Mountains to visit the Antiques Festival of the Ozarks. Kinney advises first-timers to “feel free to haggle. Most of the dealers expect it and don’t mind. But remember, these people are largely trying to supplement their retirement or make a full living from it, so don’t try to insult them by low-balling your first offer.” Evidently, many visitors have watched too many shows like American Pickers and Storage Wars. “They watch these shows, and they come in thinking they can go in and get a $100 item for like $20, and it just doesn’t work that way,” says Kinney. However, according to Kinney, if you play your cards right, odds are good you can come away with a decent discount.

Like Norris, Kinney has had the itch since she was a kid, going to flea markets and garage sales in search of hidden gems before she became a professional antique dealer. Where Norris began Ashley’s Finds as a way for her subscribers to find estate sales in Arkansas, Kinney and her husband were always hearing other dealers whinge about a dearth of good shows, and the Kinneys decided to be the change they wanted to see. “My husband was in the advertising business, and I had a great knowledge of antiques, so we just gave it a shot, and everything has worked out well,” Kinney says. The Antiques Festival of the Ozarks will showcase their antique pieces on November 22, 23 and 24 at the Best Western in Eureka Springs.