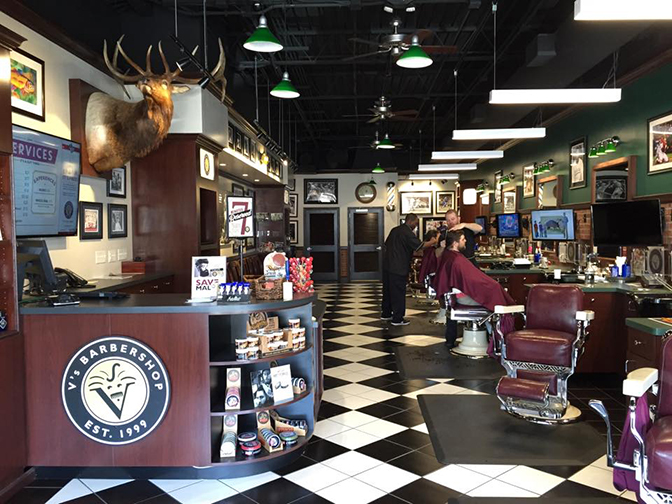 For as long as I can remember, I’ve gotten my hair cut in salons designed and marketed primarily towards women. That tends to happen when both your mother is a licensed cosmetologist and your grandmother owns a salon. It wasn’t until I moved to Little Rock last year that I had my first experience with an actual barbershop. And as much as I enjoy having my hair washed and played with by women, from now on, it’s the barbershop for me.
Specifically, V’s Barbershop in Midtown.
V’s is a chain barbershop, but don’t let that deter you. This place strives to provide their customers with the experience of a “classic barbershop.” Large, classically-designed leather barber chairs line the wall where the pros go to work. Each booth has a television for customers to take in a little sports, news or daytime television during their visit. The room is covered in an array of sports memorabilia and photographs, from Darren McFadden carrying the rock to Muhammad Ali KO’ing Sonny Liston. 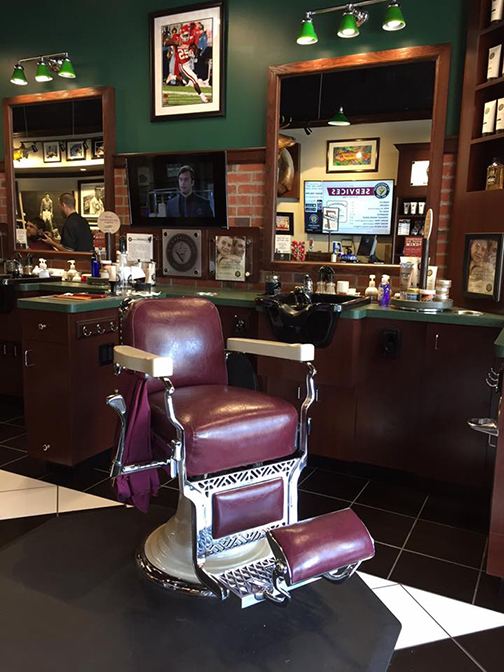 A barber chair at V’s Barbershop in Midtown Little Rock.

I lucked out during my first visit, getting Alain, who I later learned is a fan favorite. Alain, a Cuban immigrant, speaks little English but is an absolute professional when it comes to barbering. According to the brief biography hanging above his barber’s license, he learned the trade in an apprentice-style setting as a teenager in Havana. He takes his time and always delivers an exceptional haircut.
Just scroll through V’s reviews on Facebook and you’ll understand why their customers keep coming back.
At V’s, every haircut includes a neck shave and a shoe shine. They also offer hot lather straight-razor shaves and facial massages. If you want to try it all, you can get the package experience called The Works. The Whole Deal is The Works, with the addition of a facial and face massage. If you’re getting married, you and your groomsmen can get The Works and a cigar.
V’s Barbershop is located at 8204 Cantrell Road, in Little Rock next to Taziki’s. A second V’s location will soon be opening on Chenal Parkway in the Wellington Center.
If you’re a guy in search of a quality haircut, like I was, give them a shot. If you have a husband or son who needs a little off the top, you won’t regret taking them to V’s.
By Caleb TalleyAugust 15, 2018
Share this post
Share on FacebookShare on Facebook TweetShare on Twitter Pin itShare on Pinterest Share on LinkedInShare on LinkedIn Share on WhatsAppShare on WhatsApp