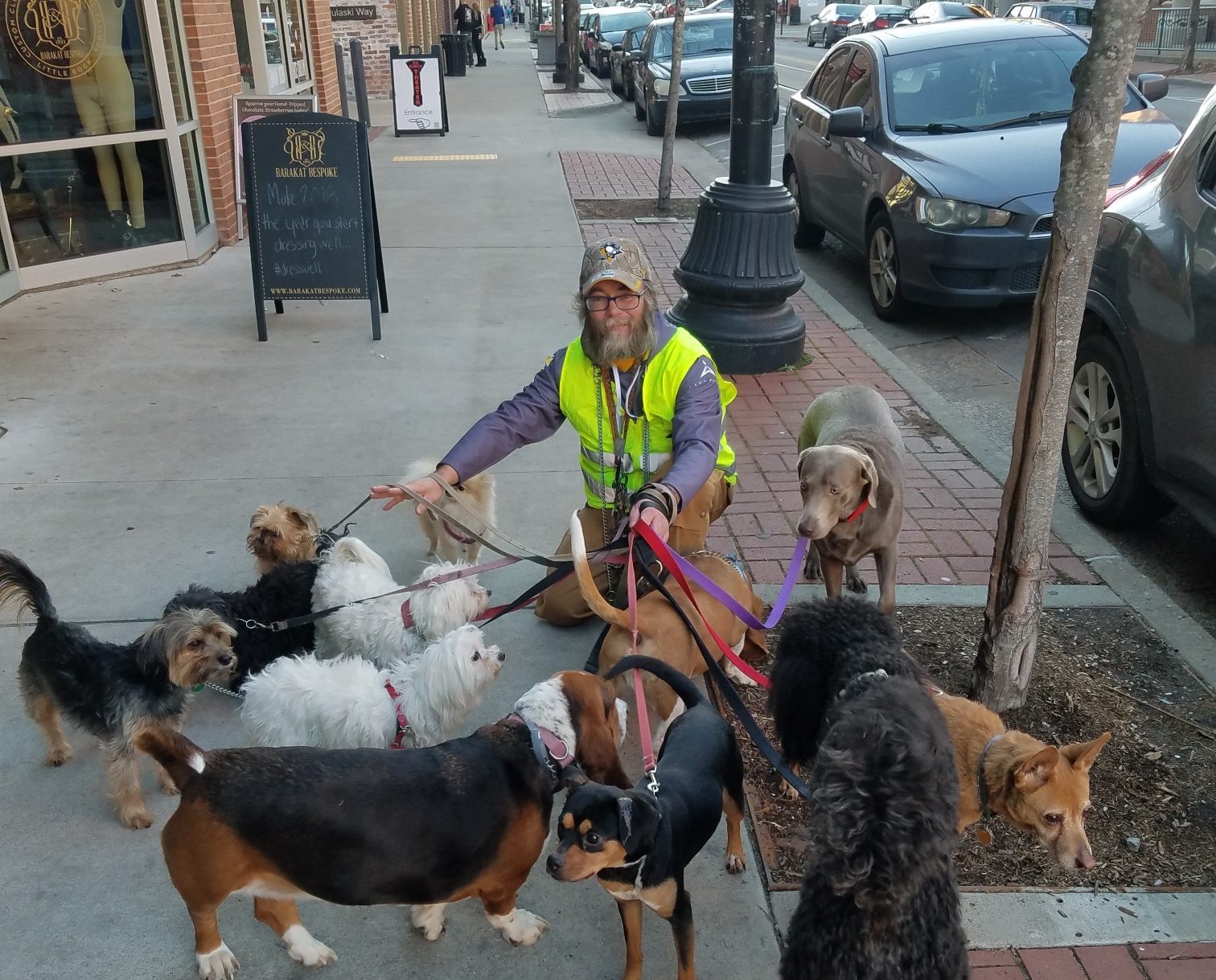 I met Daniel Lilly, the owner of Daniel’s Downtown Dog Walking and its “Chief Poop Picker Upper,” outside Dugan’s Pub on the corner of 3rd and Rock streets in downtown Little Rock. Even though I had never seen him before, he was easily recognizable; his pack of two hulking yet friendly bulldogs and a pair of rambunctious schnauzers gave him away, all connected to his right hand by an array of orange and black leashes. Lilly is a colorful figure both inside and out, clad in a neon yellow high-vis suit, a necklace of leashes and clients’ house keys, and a U.S. Marine Corps hat with a rainbow Pride ribbon affixed to the brim. He’s been walking dogs for 21 years, and has built up a large and diverse clientele consisting of people of all sorts of economic backgrounds. 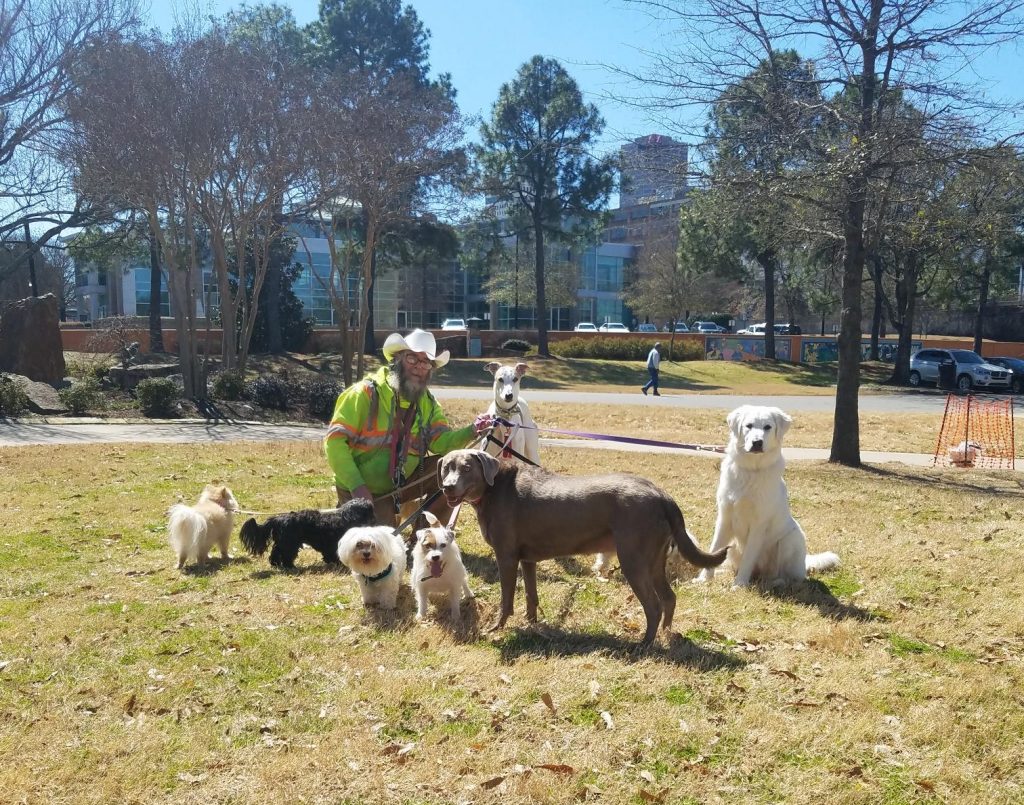 At the time I met him, Lilly was walking four dogs, which quickly grew to five after picking up a pink-collared Pomeranian from a client’s apartment. He’s been known to walk as many as 10 dogs at a time, a seemingly impossible feat which Lilly handles without a second thought. He walks 20 miles a day, every day of the week. He rarely takes breaks — because to him, what he does isn’t work. Lilly loves being present in the neighborhood, greeting people with a smile and picking up any stray litter he comes across. He tells me he mainly picks up the trash so all the dogs wouldn’t get tied up trying to sniff the same thing, but I think he is underselling himself. It’s clear that Lilly has a genuine love for the downtown area that extends beyond the dozens of dogs he walks. The feeling is mutual. The doorman at his client’s apartment greeted him by name, the supervisor of the building he lives in candidly said he was her best tenant. People of all ages and walks of life greeted us on our walk. Although — of course — most of their attention was focused on the squadron of dogs waddling underfoot who were all too happy to bask in the attention of their newfound friends. 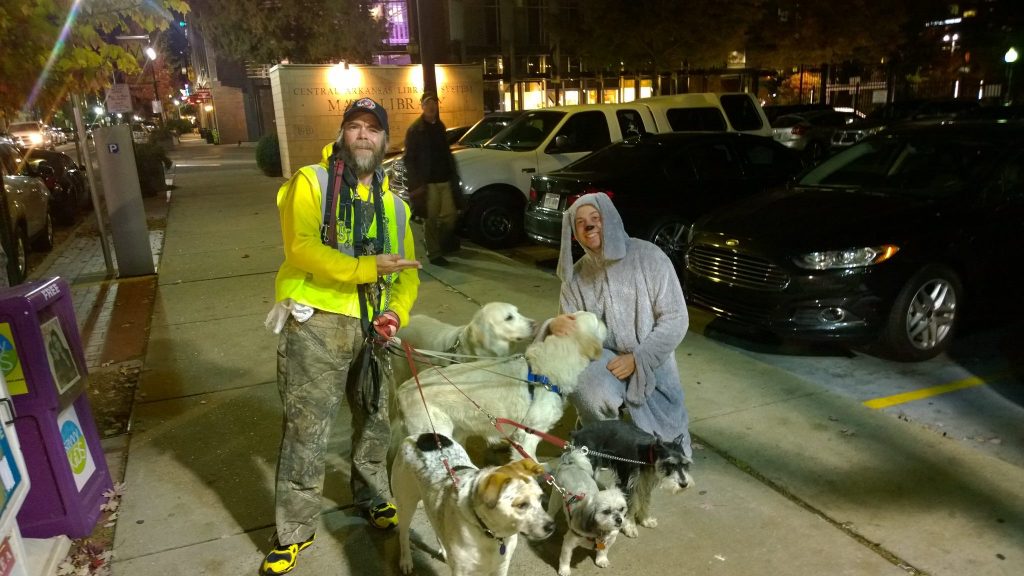 Lilly, being a former Marine, runs a tight ship, barking orders at his canine “coworkers” as they navigate the streets of the River Market. Any dissent is quickly quelled, and the dogs learn to respect and love Lilly and their weekly walks, following his orders dutifully as he instructs them when to stop, which way to turn, and regularly gives them head pats and words of encouragement. 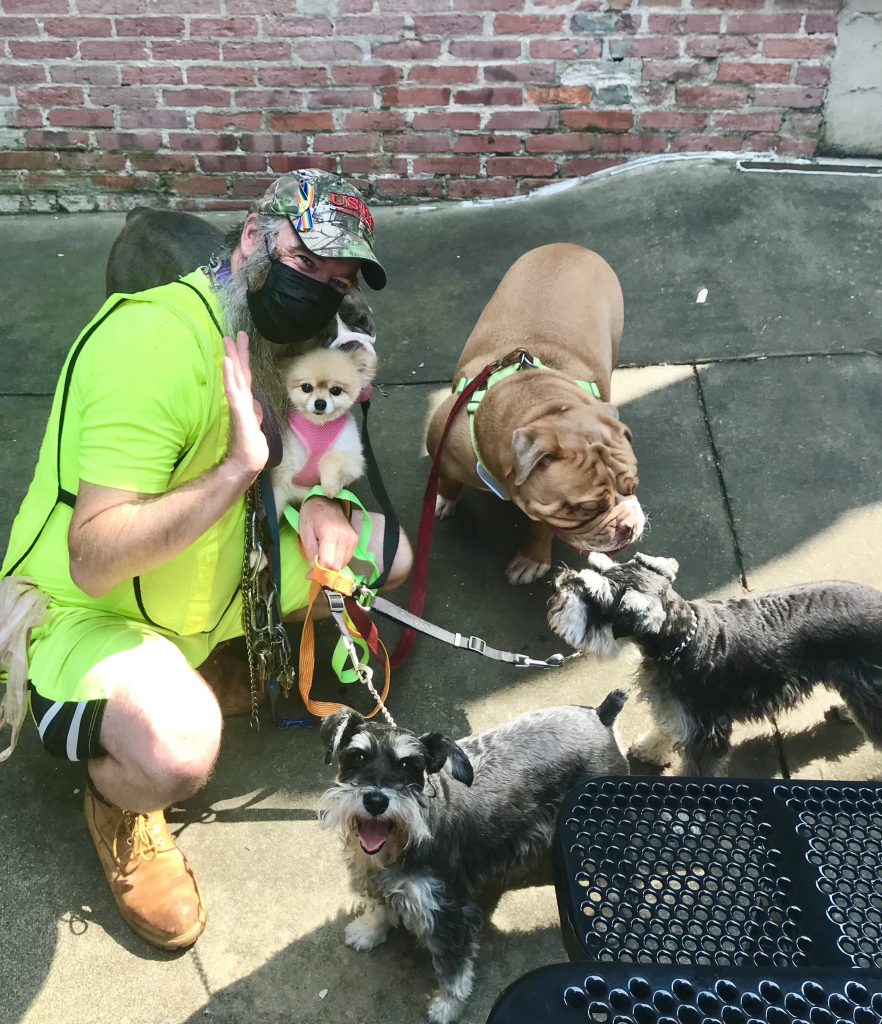 Lilly started dog walking to help out waiters and bartenders who worked late into the night, providing their pets with a chance to get outside and taking a burden off the owners’ shoulders. His rates are quite reasonable considering the amount of work that goes into it: $10 for one dog and $15 for two, with the walks lasting anywhere from 15 minutes to an hour. Since the pandemic, his business has struggled a bit, as many have, but he remains confident. He’s done this for 21 years after all, and as he told me, he plans on doing this until the day he dies.

Next time you’re near the River Market, keep an eye out for Daniel Lilly of Daniel’s Downtown Dog Walking and his roving pack of four-legged friends. They’ll be hard to miss, and always appreciate the attention. If you live in the downtown area and are interested in having Lilly take your dog on a walk, you can find more information on his website or Facebook page.