[dropcap]D[/dropcap]uring his 15 years with the United States Army Airborne Infantry Unit 82nd, 101st and 173rd, Ernesto Rodriguez deployed on 4 tours of duty-2 to Iraq and 2 to Afghanistan. His unit was one of the first to walk on Iraqi soil during the March 2003 invasion.

In experiencing PTSD himself, as well as difficulty in receiving professional help, he looked for a way to increase awareness of the symptoms and the importance of receiving proper care.

He wants to shed light and awareness to the issue of social anxiety, depression and PTSD-three conditions that tend to go hand-in-hand, and of which he believes to be largely overlooked and undermined.

Ernesto retired out of the military in Clarksville, Tennessee when he left the service after 15 years, due to an injury sustained while in the army.

This is where he began his trek last month- just him, his Walkman, his walking stick, his 50 lb. Rucksack, and the American flag-which is to be planted in Los Angeles-signifying his initial mission to raise awareness as accomplished.

We met 360 miles into his walk, in Little Rock’s River Market District, where he was staying at the Courtyard by Marriott, who had provided him with overnight stay at no cost.

“Do not fund me”, says Rodriguez. He believes that his mission is more powerful if it is known that he is not raising funds or accepting sponsorship. His only request is for a warm room, a hot meal and the occasional haircut and beard trim, as he travels to tell his story to local media, meets with military families impacted by PTSD, and anyone else who’ll listen. He also uses social media to raise awareness of the need to acknowledge and help those who are suffering with PTSD.

His desire to not receive money has provided more than one humorous episode. He recalled one instance, after insisting he wanted no money, “as they were driving off, they rolled money up into a ball and threw it at me.”

Rodriguez describes PTSD as a cause and effect “injury”. He believes that the fact it’s labeled as a ‘disorder’ is somewhat misleading in the fact that a disorder is something that is oftentimes attained genetically, and not as an effect of an incident or series of events.

Rodriguez recalls that when he, himself was trying to receive treatment, was given a diagnosis from a doctor via SKYPE; in fifteen minutes.

“Did you ever receive any real help?”, I asked. 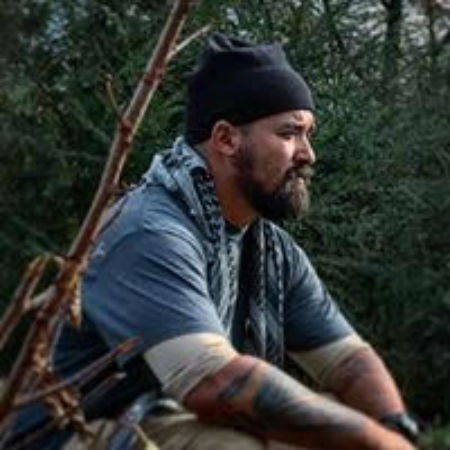 “At first; a lot of this”, said Rodriguez-making a thumb and pinky gesture, while knocking his head back.

“The VA sometimes won’t give you attention when you have been non-active”, says Rodriguez. He goes on to explain that therein lies one of the biggest problems-PTSD oftentimes does not surface until you are inactive, years later.

Rodriguez notes that “When you are serving, you are taught to repress emotions, so that you can stay focused and do your job”. Time and time again of doing this, and you have a pressure cooker of repressed and unresolved thoughts and emotions ready to rear their ugly heads in a number of unpredictable ways.

“Many friends have passed on-some through combat and some after. Most of them have taken their lives due to the inability to cope or understand how to live life after seeing so much horror…”, Ernesto explains.

Today, Rodriguez not only walks to bring awareness but also for his own recovery. He has been held at gunpoint, fought off a lone coyote with his walking stick, and amidst his own “loneness” finds comfort in listening to music, and “just walking, just moving”.

“Being alone is the worst part-walking is distracting”, Rodriguez notes. He describes that although the hotels he gets to stay in are usually nice, that those are the most difficult times.

It is illegal to walk on the interstate, so he takes back highways, and only accept rides if trying to avoid bad weather or in case of emergency. The rucksack that he carries is signed by veterans and their families along the way.

I can imagine that this walk is very much a “catch 22” for Rodriguez with perpetual highs and lows-healing and cathartic but also inescapable of the grief and remorse he feels for those that took their lives.

Yesterday, Rodriguez made it to Bryant, Arkansas-382 miles from his home and with roughly 1465 miles left to go. He says that “I miss my home terribly but know this is for a bigger purpose.”

His route from here will take him through Dallas-Ft Worth, El Paso, Tucson, Phoenix and finally Los Angeles where he will plant the American flag on the west coast to symbolize the end of his journey, but hopefully not the end of this message. 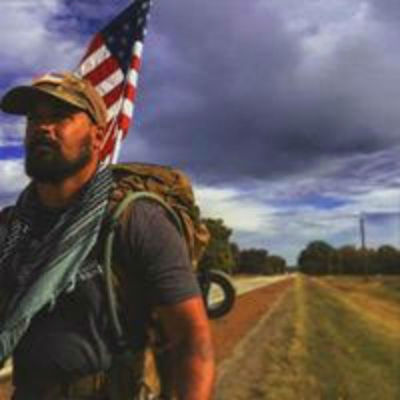 If you or someone you know is experiencing military related PTSD, or are a loved one wanting to learn more about PTSD click here. http://www.ptsd.va.gov/public/where-to-get-help.asp

If you are experiencing a PTSD crisis or feeling suicidal

* Go to the nearest emergency room