Walnut Ridge Celebrates the Town’s Musical Heritage with Beatles at the Ridge Festival on Sept. 18-19 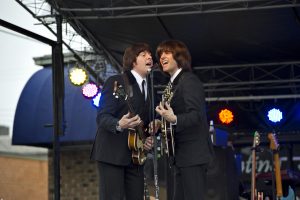 Beatles at the Ridge Festival in Walnut Ridge, 2012

It started in September 1964. Four young men from Liverpool needed some rest and relaxation. It had been a stellar year for the guys – John Lennon, Paul McCartney, George Harrison and Ringo Starr. In August, the foursome, known worldwide as the Beatles, returned to the U.S. for their American tour, performing in concert 30 times in 23 cities. They had five singles in the Top 5, their first movie, “A Hard Day’s Night,” premiered in the United States, and fans couldn’t get enough of the Fab Four. But the “four” were exhausted and needed some down time. A ranch in Missouri was offered to the group and a small Arkansas town was chosen for the perfect stop to change planes because the airport had a large runway and there wouldn’t be a huge crowd waiting for them. Well, part of that was true.

What no one realized at the time is that three teenagers saw the plane circling the Walnut Ridge Airport and drove out to see what was happening. They arrived just in time to see the Beatles depart from the airplane onto a smaller aircraft. Needless to say, word spread quickly around the small town.

When four of the most recognized celebrities on the planet returned to Walnut Ridge that Sunday, nearly 300 people were waiting, to their surprise. And thus, Walnut Ridge became the only Arkansas community the Beatles visited, if only for a short time. 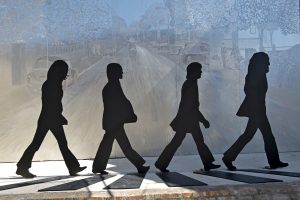 In recent years, Walnut Ridge has embraced the Beatles history. In September 2011, a life-size sculpture of the Beatles as they appear on the “Abbey Road” album was commissioned. The piece, entitled “The British Invasion of the Rock ‘n’ Roll Highway,” is in reference to the town’s location along the historic Rock ‘n’ Roll Highway 67. In 2012, the Guitar Walk, a 115-foot-long by 40-foot-wide guitar based on John Lennon’s Epiphone Casino and honoring musicians that played along the historic Highway 67, was unveiled and the inaugural Beatles at the Ridge festival was held. Businesses and storefronts throughout Walnut Ridge now sport Beatles signs, collages and caricatures year-round. 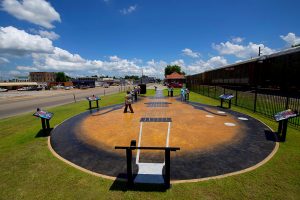 The 4th annual Beatles at the Ridge festival is slated for Sept. 18-19. As in the past, the festival features great live music both days, including performances by Deadwood Grove, Jeffrey and the Pacemakers, Lauren Richmond, northeast Arkansas’s own Sonny Burgess and the Legendary Pacers, Arkansas Brothers, Riverbilly and Liverpool Legends, the Grammy-nominated tribute band hand-picked by George’s sister, Louise Harrison. The younger Beatles fans will delight in the Octopus Garden for Kids, where they’ll find a rock climbing wall, Jurassic Adventure Land, a giant wave slide, Obstacle Xtreme, and the Dino Bounce. Other activities include the Nuttin’ But Talent contest (the winner will open for the Liverpool Legends), a British car show and shine, an air guitar competition, duck calling contests, and much more.

This year’s festival kicks-off on Friday, Sept. 18, with the Elvis Presley Forever stamp dedication at 10 a.m. at the Guitar Walk at Cavanaugh Park. The event is the only opportunity in Arkansas to get the first cancellation of the Elvis Forever commemorative stamp. Also on hand will be Ivor Davis, author of “The Beatles and Me on Tour.” Davis was the chosen reporter hired by Liverpool Newsagency to travel with The Beatles on their 1964 tour. He was with Beatles on their fateful trip to Walnut Ridge and the only journalist with the group on the entire tour. 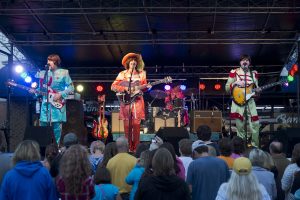 Beatles at the Ridge Festival in Walnut Ridge, 2012

One of the major draws for the festival each year is the Artists and Authors Symposium, which opens on Friday at noon. The symposium features national and international writers talking about the Beatles, their music, their impact and their legacy. The authors will be discussing their writings as well as offering book signings throughout the festival. Ivor Davis, the writer of “The Beatles and Me on Tour,” is the featured author this year, and will discuss the history-making events of 1964 when he traveled with The Fab Four. This year’s artists include Featured Artist Seth Swirksy, creator of the movie, “Beatles Stories.” Swirsky is an award-winning filmmaker, recording artist, and writer, having written songs for Elton John, Celine Dion, Smokey Robinson, and Taylor Dayne. Rande Kessler, who has created four mixed media sculptures depicting each of the lads from Liverpool specifically for the Beatles at the Ridge festival, will also be one of the highlighted artists during the symposium. Kessler is also known for his “Doors of Liverpoool” art posters and hand-sketched Beatles shirts. Presentations by the authors and artists continue throughout the day on Saturday.

The Argenta Collection will be displayed as part of the Beatles Artists and Authors Symposium. The compilation includes over 200 images of John, Paul, George and Ringo, and is believed to be one of the largest collections in the world. The collection will be on exhibit during the festival at The Studio, located at the corner of Main St. and Abbey Road in Walnut Ridge.

To learn more about the Beatles at the Ridge festival, log on to www.BeatlesattheRidge.com.

While School’s Out, Conway Student Aims to Help Those in Need
April 8, 2020

Restaurants and Businesses – Schedules and Updates Due to COVID19
April 7, 2020