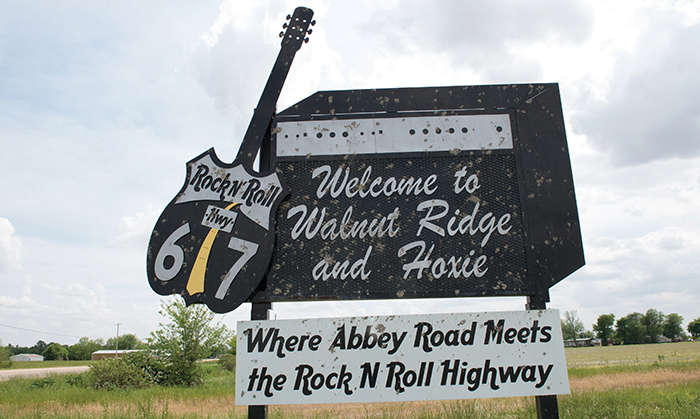 Carrie Mae Snapp saved the lives of The Beatles when the English rock group’s airplane made a brief stop in Walnut Ridge in 1964.

But if not for a friend who had seen the Fab Four land at the Lawrence County airport the previous night, and for a pilot who admitted the group was leaving the following morning, The Beatles may not have gone on to bigger fame and fortune.

The four had finished a concert in Dallas, Texas, on Sept. 18, 1964, and had planned to fly to New York a few days early before their final United States show that year so they could visit the city. However, memories of being swarmed by fans wherever they went dashed that idea.

They opted instead to take a two-day respite at a small farm near Alton, Missouri. The closest airport was in Walnut Ridge, so on the evening of Sept. 18, the twin-engine plane bearing the famous singers circled the town, drawing the attention of three teenagers.

They rushed to the airport, thinking a plane was going to crash. Instead, they watched as Paul McCartney, John Lennon, George Harrison and Ringo Starr stepped off the aircraft. 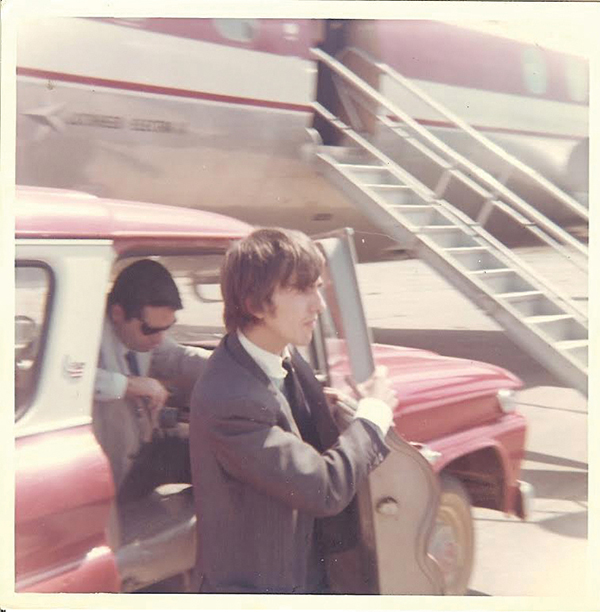 George Harrison at the Walnut Ridge Airport in 1964. (Pate Snapp)

Snapp says the group drank whiskey with the boys, and Starr and the three teenagers chased each other with cap pistols on the airport’s runway before The Beatles eventually headed to Missouri.

Gene Matthews, who later became the Lawrence County Sheriff and was killed in a 1983 shoot-out, was one of the three teenagers. He called Snapp to tell her the news late that night. 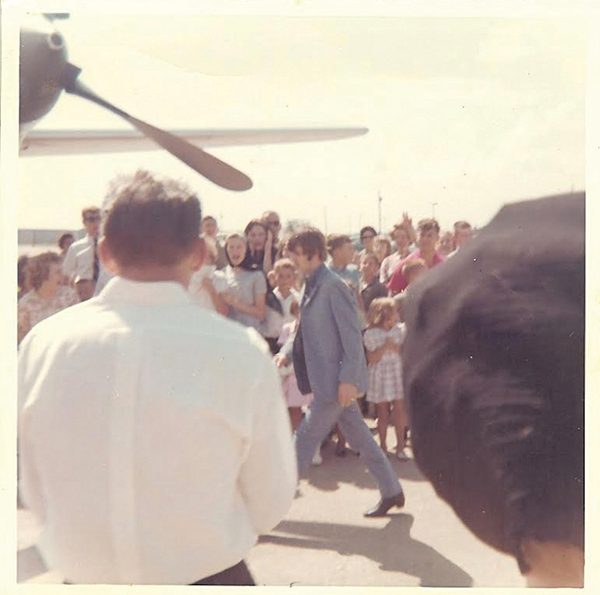 Snapp, then 14, was the president of the Beatles Forever Fan Club at the Walnut Ridge High School. It was well after midnight when Snapp’s father answered the phone and learned of The Beatles’ landing in Walnut Ridge.

The next morning, Snapp’s mother took her daughter to the family owned Alamo Court motel and searched for someone who looked like a pilot. She found him eating in their Davy Crockett restaurant adjacent to the motel and pointed to her daughter.

“See her crying?” she asked the pilot. “She didn’t get to see The Beatles land, and she just has to.”

The pilot first refused to reveal when the group would return, but the girl’s tears softened him up.

“He said, ‘Well, if it were me, I wouldn’t go to church Sunday morning,’” Snapp recalls today. “My dad wanted us to go to church first, but I was afraid we’d miss them, and I asked him, ‘What if  The Beatles aren’t Methodist?’”

Early that Sunday morning, Snapp and more than 100 others sat in lawn chairs at the airport, waiting for The Beatles, and that’s when she saved their lives.

Snapp says she noticed an emergency door at the back of the airplane ajar. She had read that a popular psychic at the time, Jeane Dixon, predicted the Beatles would be killed in an airplane crash during their 1964 tour. Earlier, she had correctly predicted the assassination of President John F. Kennedy. The trip from Walnut Ridge to New York would be their last flight of the 1964 tour, Snapp says. Fueled with Dixon’s prediction of doom, Snapp took action.

She and others climbed onto the wing of the plane and secured the door.

“We saved The Beatles from certain death,” she quips.

Then The Beatles arrived.

The vehicle doors opened, and out stepped The Beatles.

“You lose your mind, and a fog comes over you,” Snapp says about seeing the four. “It’s Beatlemania.”

Fifty-seven years later, the town is still buzzing over the brief visit. It’s the catalyst for a Beatles-themed festival that began in 2011 and a remake of the downtown that has drawn international attention.

Despite the cancellation of the festival the past two years due to COVID-19, the fervor for The Beatles remains throughout the year. Visitors from as far as Japan have stopped in to see the town’s brush with greatness. 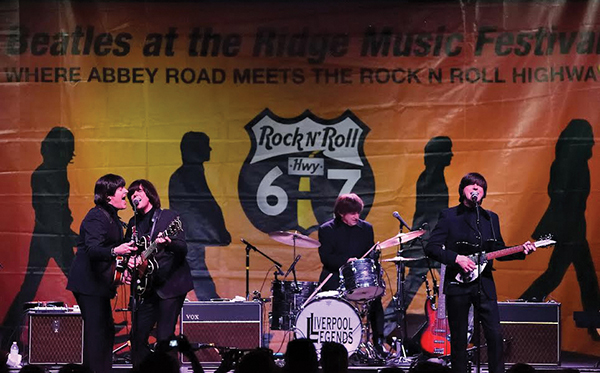 Called Beatles at the Ridge, the annual downtown Walnut Ridge event is held on the closest weekend to commemorate the visit. The show features vendors, food and musical groups.

When the bands stop playing, the music doesn’t stop, though. Walnut Ridge Mayor Charles Snapp, the brother of Carrie Mae Snapp, has turned his town into a year-round tourist destination for musical history buffs.

The Lawrence County town has capitalized on the rockabilly musicians who played at joints, bars and dives along U.S. 67 — renamed by legislators in 2009 as the “Rock  ’n’ Roll Highway” in honor of such performers as Elvis Presley, Jerry Lee Lewis, Sonny Burgess, Johnny Cash and Roy Orbison.

Volunteers built a large guitar-shaped pavilion beside the Lawrence County Chamber of Commerce and the Amtrak train station in Walnut Ridge that features information on the musicians who plied their trade along the highway.

City council members also renamed Southwest 2nd Street as Abbey Road and created a “pocket park” where a large metal sculpture of the cover of The Beatles’ album Abbey Road is displayed. Shop windows along the street are painted with Beatles’ art and sell musical memorabilia.

Walnut Ridge is ranked as one of the best Beatles spots to visit in the United States by Tripsavvy, a website that ranks tourism destinations. The Beatles Park at 110 Abbey Road is ranked with such stops as the Beatles exhibit at the Rock & Roll Hall of Fame in Cleveland, and the Strawberry Fields memorial for John Lennon in New York’s Central Park.

The concept was the brainchild of about six Walnut Ridge residents, including Charles Snapp, who at the time was running a hunting service and was not interested in politics.

Then-Chamber of Commerce Director Brett Cooper asked the group to come up with a festival in 2011 that highlighted the musical history of the area. Newport, to the south, held its yearly Depot Days that showcased the rockabilly music; and Pocahontas, about 15 miles north of Walnut Ridge, also held an annual musical festival.

Indeed, Snapp was there. Dragged to the airport that Sunday in 1964, Snapp had to endure the embarrassment of changing from his play clothes into his Sunday dress clothes in the crowded car as they drove to the airport.

Walnut Ridge is ranked as one of the best Beatles spots to visit in the United States by Tripsavvy, a website that ranks tourism destinations. (ADPHT)

West, who owns a metal shop, designed what would become the metal album sculpture on a 2-foot-by-4-foot sheet of aluminum.

“We realized we had something here,” Snapp says. “I knew I could sell this concept to the world.”

West made the much larger sculpture, and the Jonesboro ABC television affiliate station aired a story about it. Then, the ABC network picked it up.

Louise Harrison, guitarist George Harrison’s sister, called city leaders to talk about the tribute, and the group brought the small album sculpture display to Branson, Missouri, to meet her. She offered to bring her band, Liverpool Legends, to Walnut Ridge to play during the unveiling of the larger sculpture.

The group played in a rain-soaked afternoon to about 3,000 people on Sept. 18, 2011, and the annual event was born. The Wall Street Journal covered the inaugural festival.

“This put us on the international map,” Snapp says. “During the festival, we counted license plates in town from 20 to 25 different states.

“To this day, we still have a continuous draw of people to Walnut Ridge. … It’s not Six Flags over Portia,” he jests, referring to a national theme park and a small Lawrence County town on the eastern banks of the Black River. “But we’d see two or three cars each day, or a motor coach tour coming through from Memphis to see the music sites. It wasn’t uncommon to be at a restaurant and see a family from Italy, or a family from Japan or the United Kingdom eating there, too.”

Six weeks before this year’s festival was to occur, the Lawrence County Chamber of Commerce voted to cancel it. Chamber Board Chairman Josh Conlee is also the president of the Lawrence Memorial Hospital. Fearing the skyrocketing increases in COVID-19 infections in the area lately, Conlee asked that the festival be canceled. 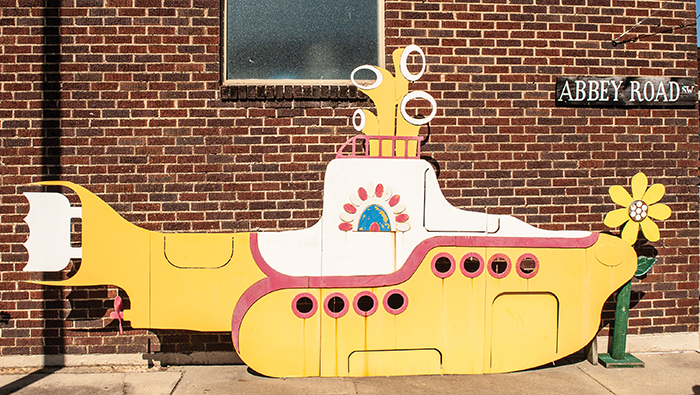 “On Monday [Aug. 2], I texted bands and the sound stage and said it was a go,” Snapp says. On Wednesday, he had to call them back to tell them the news.

When asked if the chamber would change its mind, Snapp simply replies, “No chance.”

Carrie Mae Snapp has attended each of the Beatles at the Ridge shows, and watching the Liverpool Legends play The Beatles’ hits of her childhood stirs those memories of seeing them 57 years ago.

“All I could do was cry,” she says, remembering when she stared in a trance as the group walked to the airplane. She reached out and touched George Harrison’s coat sleeve as he passed by, and she remembers him laughing and gesturing to her.

The Beatles quickly climbed the steps into the aircraft and did not come out before the plane took off for New York. 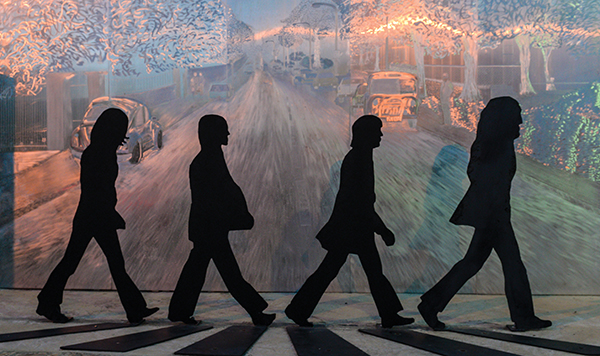 But Paul McCartney raised the window shade at his seat and looked at the adoring crowd below.

The airplane taxied down the long runway and then took off, bound for The Beatles’ last show in New York while the Walnut Ridge crowd watched. The plane, by the way, made its voyage safely.