Washed Ashore: A “Trashy” Way to Save the Sea

When visiting the Washed Ashore: Art to Save the Sea exhibit at the Clinton Presidential Center, one is struck by the colorful sculptures and 3-D art of ocean life. Approach the displays for a closer look, though, and you will find those pieces of art are, well, trash. 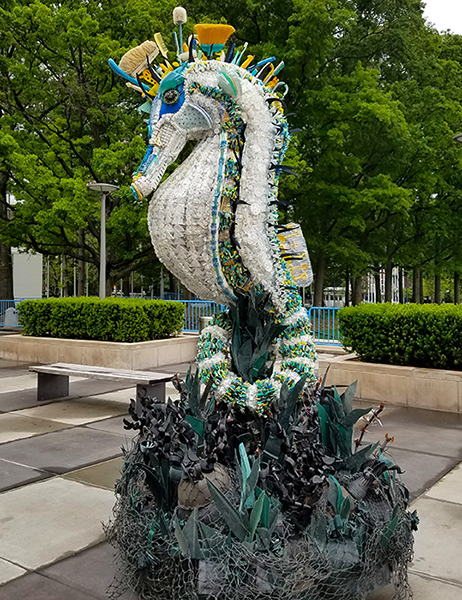 Stella the Seahorse is made of mostly discarded plastic bottles, bottle caps and a variety of plastic brushes. Greta the Great White Shark consists of abandoned beach toys, old lighters and plastic drink bottles. Beer cans, empty shotgun shells, fishing lures and more litter the entire display. All of the material used in the Washed Ashore exhibit was collected along the Oregon Coast by artist Angela Haseltine Pozzi and her troop of volunteers. “The work is made to pull you in with its beauty,” Pozzi points out. “But also make you stop and think ‘this is all garbage picked up off of beaches, this is beautiful and horrifying.’”

Pozzi launched the Washed Ashore Project in 2010, and to date, she and her team have collected more than 21 tons of garbage and converted it into art. Her exhibits have been displayed at dozens of prestigious locations around the U.S., including Disney’s Epcot and Animal Kingdom, SeaWorld Parks in San Diego, Orlando and San Antonio, and the Smithsonian National Museum of Natural History. Now, the Clinton Presidential Center is proud to host a Washed Ashore exhibit, making it the first presidential library to do so.

According to communications and marketing director Ben Thielemier, the center felt Washed Ashore was the perfect kind of dynamic, family-friendly exhibit they like to offer during the summer months, similar to the previous Dinosaurs Around the World in 2015 and Xtreme Bugs in 2017. The Washed Ashore exhibit has the added bonus of addressing the critical issues of pollution and global warming. Former President Clinton and the center staff share Pozzi’s ambition of educating the public on the gravity of the situation of our polluted oceans and issuing a call to action.

Pozzi calls it an honor to display her art at the Clinton Presidential Center. “It has been wonderful to work with such a dedicated staff,” she says. “The volunteer base at the Clinton Center is similar to the amazing volunteers we have at [the] Washed Ashore [Project]… With everyone caring about the message and putting in massive hours, great things can be accomplished.” 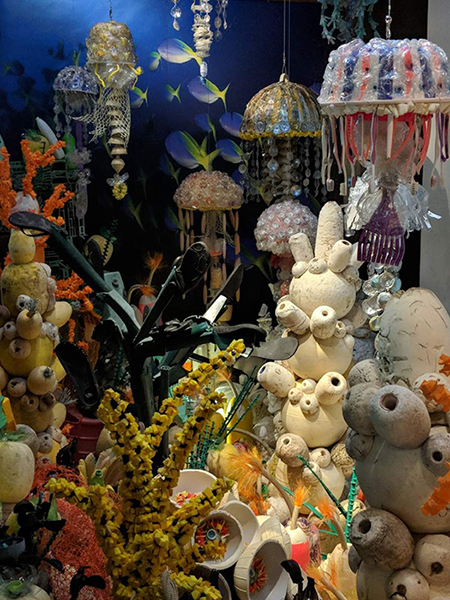 Pozzi also points to the ideal location of the center. “With the Clinton Center located right next to a major river which empties into the Gulf, we were able to make the vital connection to how water runs downhill from everywhere,” she says. “Waterways carry our plastic pollution from street, to gutter, to stream, to river and out to the ocean, ultimately affecting the animals of the sea.”

Thielemier shares a similar sentiment when he speaks to visitors about the exhibit. “I point to Fourche Creek and tell people we’re responsible for all this trash,” he says. Fourche Creek is one of the largest urban wetlands in the country, receiving about 73 percent of Little Rock’s runoff. The well-chronicled efforts of the Friends of Fourche Creek to clean up the creek illustrate the serious pollution problem right here at home.

The Clinton Center is the first venue to provide adequate space for the Washed Ashore Project to create unique environments in two separate locations, including a “premier” Bleached Coral Reef exhibit in the center’s third-floor gallery. “I was especially thrilled to design the upstairs gallery to give the audience the sense of walking through a giant coral reef,” Pozzi gushes, “which is teeming with life and colorful sea jellies, but is also dying at the same time.” Pozzi and her team built the coral reef on-site using polystyrene beach debris. It delivers a dual message, pointing to the obvious problem of plastic pollution while also calling attention to the fact that 75 percent of the world’s coral reefs are currently threatened by local and global pressures. 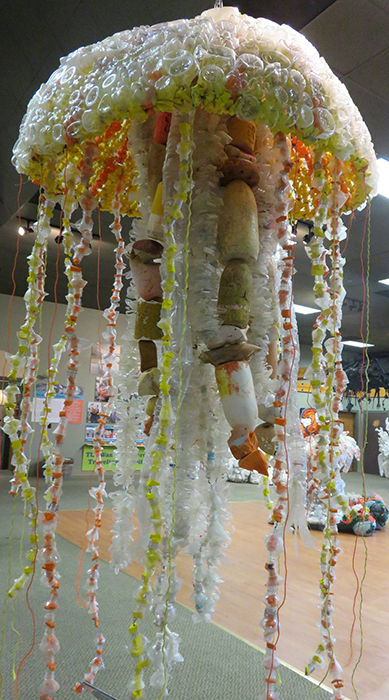 A jellyfish (that twirls!)

The downstairs exhibit is designed to be fun and interactive with the Marine Debris Drum Set, jellyfish that twirl, a seat within the Greta the Great White Shark sculpture for taking photos and a huge whale ribcage that folks are able to walk through. But the purpose is the same. “Washed Ashore was created to teach,” Pozzi says. “It’s tricky with the depressing topic of plastic pollution. It can be easy to turn your back and walk away, but the power of the arts, if used well, is it can grab your attention.” 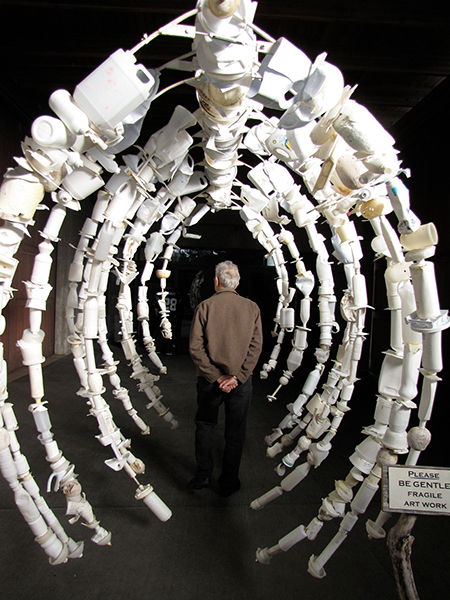 Pozzi, who taught art in public and private schools and universities for more than 30 years, certainly uses her art well. “Both of my parents were professional artists,” she recalls. “Art was my first language. I was taught from an early age the value and power of the arts to reach into the heart and mind [to] make you think and feel. In many ways, I am still an art teacher.”

What Will You Do?

The Clinton Center staff wants to provide visitors with an opportunity to add their voices to the exhibit, so they set up an interactive display in the front lobby. Notes scribbled by visitors from around the world are responding to the prompt:

“Every action counts to save our oceans and waterways: What will you do?”

“We decided to add the ‘what will you do’ feedback wall as a way to engage our visitors and encourage them to think about how they can make a positive impact on our environment,” Thielemier says.

It appears to be working. The messages penned in multiple languages show the impact of the exhibit, especially on young people.

Fourteen-year-old Liam, from San Diego, writes that he plans to “use better alternatives to plastic such as wood pulp.”

Savannah states, “Every time we go to the river, lake, and beach, my family will pick up every bit of trash.”

Makinley (with a heart over the “i”) from Ohio promises “I will pick up trash not onley [sic] on erath [sic] day but every day.”

Twelve-year-old Dakota, from New York, writes “I will use my trash to do stuff to help the world, so reuse.”

Washed Ashore, which is sponsored by the Regional Recycling and Waste Reduction District, will be at the Clinton Center until October 27. Thielemier suggests the best way to approach the exhibit is to, “first, bring the whole family and play the Styrofoam drum set, get a picture with Greta the Great White Shark and admire the beauty of the colorful coral reef. And then take a few minutes to stop and look closely at what the artist used to make each of the sculptures. How many of those items — plastic water bottles, flip flops, packaging, toothbrushes, water toys and so much more — do you use, and discard, on a regular basis? Look for the bite marks made by fish, sea turtles, and birds. Then, finally, make a commitment to rethink, reduce, recycle and refuse, to limit the plastic entering our ecosystem.”