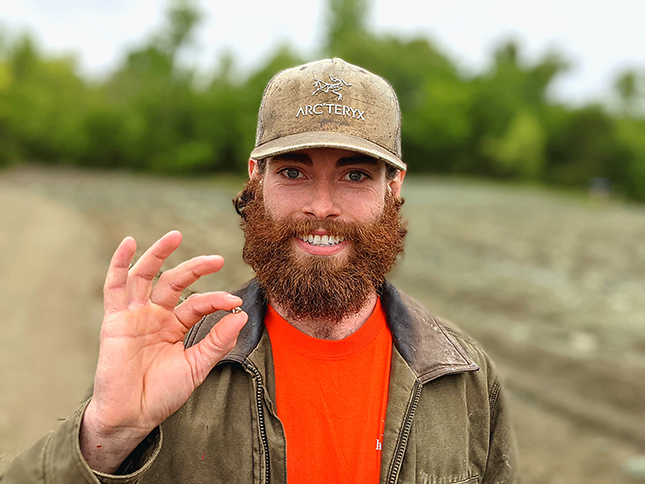 Diamond hunting is a rite of passage in the state of Arkansas as it is the only state in the country where the public can mine for their own gemstones. The mine calls to visitors from near and far, and for Christian Liden visiting from Washington, the Crater of Diamonds State Park was an answer to prayers.

Liden has been planning for years to create an engagement ring made out of materials he has found himself. Panning around Washington, Liden found enough gold over the course of five years to make the ring. He has since traveled from state to state searching for gems and improving his methods.

Liden and a friend built their own mining equipment and tested it out at a sapphire mine in Montana on his way to Crater of Diamonds. Finally reaching Murphreesboro, Liden struck gold on his third day at the park. “I saw it shining as soon as I turned the screen over and immediately knew it was a diamond. I was shaking so bad, I asked my buddy to grab it out of the gravel for me!” The diamond was confirmed to be a large, yellow diamond at the park’s Diamond Discovery Center.

Liden’s diamond weighed 2.20 carats, the largest found at the park since October 2020 when a visitor from Fayetteville found a 4.49 carat yellow diamond. “Mr. Liden’s diamond is light yellow, with a triangular shape and a sparkling, metallic luster. Like most diamonds from the park, it contains a few inclusions, making it one-of-a-kind,” says Assistant Superintendent Dru Edmonds. “As beautiful as this diamond is, I think the best part is the story behind it,” Edmonds continued. “Since the eighth grade, Mr. Liden has dreamed of creating a special ring for his future wife, with stones and gold he mined, himself. And now he can make that dream come true!”

Liden had planned to find a few smaller gems at the Crater of Diamonds and purchase a larger center stone later, but he now says he no longer needs to purchase a stone after this finding. The next stop on his gemstone trip will be mining for opals in Nevada. He will design a ring with his bride-to-be after he proposes using the gems he has found around the country.

The lucky visitors at the Crater of Diamonds State Park have the opportunity to name their diamonds of significant size. In reference of his home state, Liden named his stone “Washington Sunshine.” “It’s got a nice, light yellow color, just like sunlight in Washington,” Liden said.

Admission into the park’s diamond mine area is currently limited to 1,500 tickets per day. If you’re feeling inspired after this story and the 121 other diamonds found to date in the year of 2021, you’re encouraged to purchase tickets in advance on the park’s website to guarantee entrance.