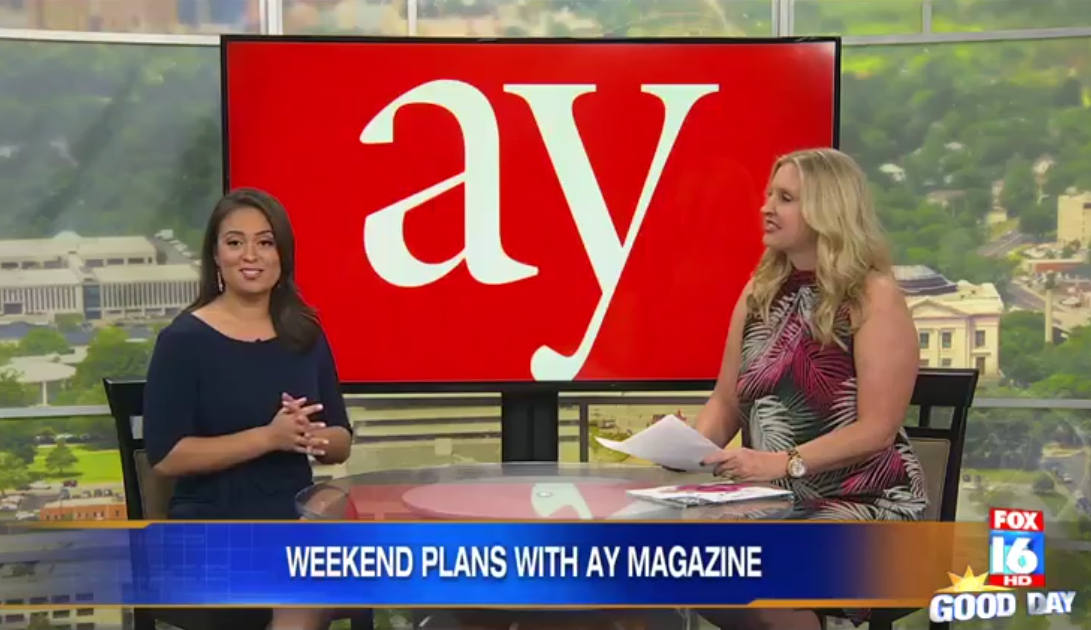 There’s a lot to do this weekend! Read on for our top picks for things to do and click here to see AY Publisher Heather Baker talk to Good Day Arkansas about your Weekend Planner.

Zoo Brew
Grab your souvenir cup and head over to the Little Rock Zoo for the most unique craft beer festival in town. Sample dozens of beers from local vendors, try food from local food trucks and listen to some great live tunes by one of Arkansas’ hottest cover bands. Zoo Brew kicks off at 6 p.m. and runs until 9 p.m. New this year is a “bear pong” tournament. Instead of cups, they’ll use buckets.

Zoo Brew is a fundraiser for the Arkansas Zoological Foundation. Event proceeds directly benefit the Little Rock Zoo and its mission.

Jazz Eureka Kicks Off in Eureka Springs
Jazz Eureka celebrates 32 years of jazz in Eureka Springs with a stellar lineup this year. The event starts with a lawn party at the Crescent Hotel on Thursday night and then free concerts are offered throughout the weekend. Musical acts include Block Street Hot Club, Fourscore, Charged Particles featuring Paul McCandless, the Richard Bruton Quartet and Saturday night headliner Veronica Swift.

For the really fun part, there will be live music, comedians, food trucks, Etsy vendors and local artists. We even heard Wonder Woman and Superman might make an appearance.

It starts at 5:30 p.m. and is held in the newly transformed parking lot next to the Argenta Branch Library, across the street from StudioMAIN.

There are so many fun kid-friendly events this weekend. Get out and enjoy the remaining days of summer.

Tinkerfest at the Museum of Discovery
Start off the day with Tinkerfest at the Museum of Discovery. If you have kids, you’re likely up early so head on over. It starts at 9 a.m. and runs until 3 p.m. The entire museum and neighboring streets will be taken over with with more than 40 hands-on, interactive activities. Each activity is intended to engage and teach visitors how everyday objects such as cars and computers work, and provides opportunities to explore the engineering and science behind building objects.

Maumelle’s Bash On The Boulevard
If the kids still have energy, head over to Maumelle for their free family-friendly festival.

There will be something for everyone: a kids zone, beer garden, car show, food trucks, games and so much more. Proceeds from Bash on the Boulevard help raise funds to support economic development and promote entrepreneurship opportunities in the area. The event starts at noon and ends at 8 p.m.

Turkish Food Fest
It’s time to eat! The 7th Annual Turkish Food Fest at 1501 Market Street will feature Mediterranean and central Asian cuisines. From 11 a.m. to 6 p.m., diners can enjoy kebabs, gyros, lahmajoon, kofta, a variety of desserts and more. There will also be live music and performances all day long.

Legends of Arkansas 2017
Head back over to North Little Rock after 2 p.m. to experience Legends of Arkansas. They have an incredible main stage lineup with the Brian Nahlen Band, Dazz & Brie, Rodney Block and Knox Hamilton. You’ll also get to experience Arkansas artists, beers, food and more. Tickets are only $5 and kids get in free. Enjoy the North Shore River Walk until 9 p.m. All proceeds benefit The Van, a nonprofit that helps provide basic necessities to the local homeless community.

Harvest Night
At 5 p.m., you can make your way to the Arkansas Foodbank to help raise awareness about hunger in Arkansas. For the kids, there will be a petting zoo, face painting and bounce houses. For adults there will be live music, lots of food, craft beer and great dessert from Loblolly and Honey Pies. Adult tickets are $40, which includes dinner and two drinks. Kids 12 and under are free. The evening event ends at 8 p.m.

Janet Jackson at Verizon
She’s back! The multi-talented singer, songwriter, dancer and actress will perform at North Little Rock’s Verizon Arena after cancelling her previously scheduled May 2017 concert last year. Jackson postponed her tour after announcing she and her husband were going to have a baby.

The concert starts at 8 p.m. and you can expect to hear songs from her most recent album, “Unbreakable.”

Nightshade Festival at Bernice Garden Farmers Market
Bernice Garden is celebrating the end of summer with an ode to some of our favorite summer veggies. Nightshades include tomatoes, potatoes, eggplants and peppers. The festival and farmers market is open from 10 a.m. to 2 p.m. They will have live music, food demonstrations and more.

Little Brother at the Weekend Theater
The Weekend Theater in Little Rock is known for taking on socially conscious material. Starting Sunday, they will be presenting “Little Brother,” a play adapted by Josh Costello from the novel by Cory Doctorow. While skipping school and playing an alternate reality game, San Francisco teenager Marcus Yallow ends up in the middle of a terrorist attack and on the wrong side of the Department of Homeland Security. This play asks the viewer “What is the right thing to do when authorities become oppressors?”