What is Arkansas Barbecue? 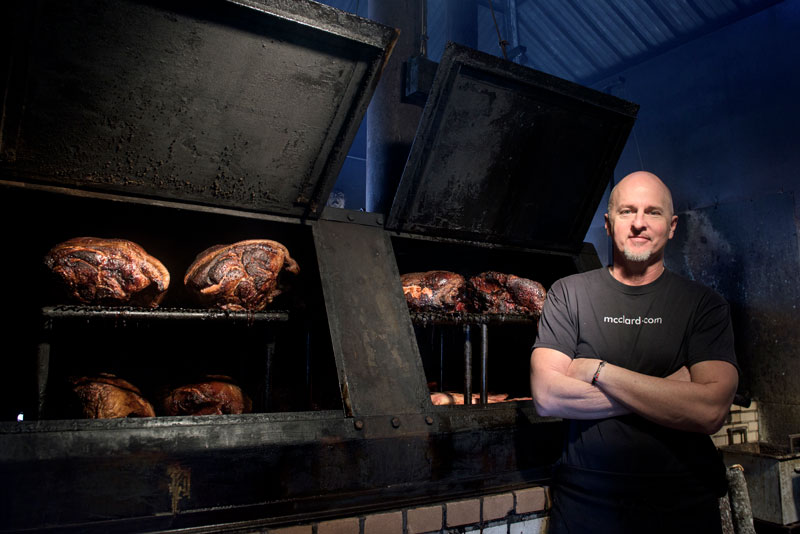 So how does one define Arkansas barbecue?

When I took on the task of writing the online introduction for the Arkansas portion of the Southern BBQ Trail (www.southernbbqtrail.com), I came to the conclusion that there are too many cultural influences and styles of barbecue in this state to come up with a single definition.

I concluded that we’re a state of contradictions that regularly confounds outsiders.

The introduction ended liked this: “Define Arkansas barbecue, you say? Impossible. Just hush your mouth and eat, the Arkansan will tell you.”

In preparing their book “The Slaw and the Slow Cooked,” James Veteto and Ted Maclin met at one of this state’s most famous barbecue establishments, Craig’s in DeValls Bluff, in June 2009.

Here’s how they described the experience: “Driving with the windows down along old Highway 70, the smell of wood smoke let us both know that we were close. Craig’s is a small white clapboard building from the 1940s with red trim and two entrances, a legacy of the restaurant’s segregated past.

(According to the McClard family, the fourth generation of which still operates the restaurant today, Alex and Gladys acquired a secret sauce recipe from a tourist court resident who couldn’t pay the $10 he owed for two months’ lodging.) 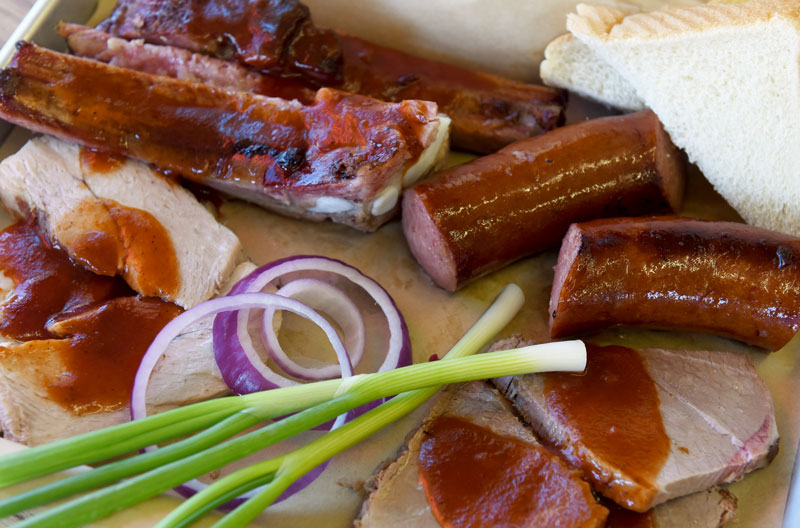 “As Maclin pulled into the parking lot with his nine-month-old daughter, the scent of smoke and the crunch of white gravel under his tires awoke memories of his own childhood. Once inside, they found a table near the door (one of only a few in the restaurant), and when Veteto arrived the conversation turned almost immediately to barbecue — the spiciness of the sauce, sliced versus chopped pork, wet versus dry ribs — intertwined with discussion of the history of this restaurant.

“Craig’s is a sit-down restaurant, but not in the sense of fine linens and hors d’oeuvres. In fact, the walls of the establishment can only be described as worn and perhaps a little dirty, but not in an unsanitary way. The short menu is at the back of the room above a counter just outside of the kitchen.

“There is no cash register in sight, and every once in a while an African-American waitress emerges from the kitchen to take orders and money, deliver food to hungry customers or bring back change from  beyond.

“By listening closely when the kitchen door flips open or while visiting the bathroom, one can usually hear the gentle beats and inspired singing of soul or gospel music. While we were there as many people ordered food to go as stayed to eat inside. A woman took our order at the table rather than having us order at the counter — as is common at many fast-food restaurants. And make no mistake — though the food arrived on paper plates rendered translucent by the grease, this was no fast food.”

“Define Arkansas barbecue, you say? Impossible. Just hush your moth and eat, the Arkansan will tell you.”

In a chapter of “The Slaw and the Slow Cooked” that’s devoted to the history of barbecue in the Mid-South, South Carolina-based food historian Robert Moss describes another of this state’s historic barbecue joints, McClard’s in Hot Springs.

“Barbecue was perfect for roadside stands,” he writes. “All the operator needed was some hickory wood and a pit dug in the ground. The cooked meat was simply wrapped in brown paper or placed between slices of bread, so it was cheap and easy to serve. At first, most roadside barbecue stands were seasonal operations and sold food for take-away only. Often, proprietors of other roadside businesses like gas stations or general stores started selling barbecue as a sideline, and some found the sideline pursuit more profitable than the original enterprise.

“McClard’s, the legendary barbecue joint in Hot Springs, is a classic example. Alex and Gladys McClard owned the Westside Tourist Court near Hot Springs National Park. In 1928, they added a barbecue pit so they could sell slow-cooked goat, beef and pork to their guests. According to the McClard family, the fourth generation of which still operates the restaurant today, Alex and Gladys acquired a secret sauce recipe from a tourist court resident who couldn’t pay the $10 he owed for two months’ lodging. 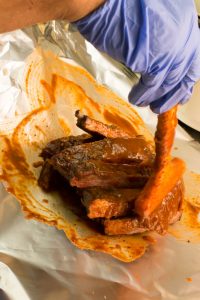 Fueled by the distinctive red sauce, which has a tomato-paste base and plenty of fiery pepper, barbecue sales took off at McClards.

“Fueled by that distinctive red sauce, which has a tomato-paste base and plenty of fiery pepper, barbecue sales took off, and before long the McClards were selling to non-lodgers as well. It was the era of Prohibition, and their barbecue attracted

the business of some of the country’s most notorious gangsters, including Lucky Luciano, Meyer Lanksy and Al Capone, who ran bootlegging operations out of Hot Springs.

“In 1942, McClard’s moved into a whitewashed stucco building. For many years, it operated as a drive-in, complete with carhops and a jukebox that broadcast over an AM band so diners could listen to music in their cars. The carhops are now gone, and goat is no longer on the menu. But McClard’s sliced beef, sliced pork and pork ribs are favorites of both local residents and visiting celebrities, including former President Bill Clinton, who lived just down the road as a boy.”

“As in Tennessee, barbecues arrived in Arkansas and Mississippi with the very first settlers,” he says. “In 1821, just a year after it was created and 15 years before Arkansas was admitted to statehood, Phillips County held its first Fourth of July celebration where ‘several beeves were roasted whole and served in barbecue style.’ The description of Josiah H. Shinn, who chronicled the event in his 1908 history of Arkansas, suggests that a little whiskey might have been present as well.”

Shinn wrote: “The Phillips County barbecue was held near a spring in the neighborhood, where a fine quality of Kentucky mint had taken hold, though why the mint patch should be immortalized I cannot say. There must have been some beverage of very strong parts, though of this the record is silent.”

W.B.R. Horner, a Virginia native and early east Arkansas settler, presided over the Phillips County barbecue until his death in 1838.

“It didn’t take long for politicians to recognize that community barbecues, with their unparalleled power to pull people together from all over a county, were ideal platforms for electioneering,” Moss writes. “Campaign barbecues became commonplace in the 1830s, and as they grew larger and became more frequent they were increasingly put on not by the candidates themselves but by groups of supporters, who arranged the venue, purchased the food and drink and advertised the events in newspapers. Such activities were part of the early formation of political parties in Southern states, and barbecues became an important forum for political discourse in the region.”

An 1840 story in the Arkansas Star, during the presidential campaign of William Henry Harrison, noted that the Tippecanoe Club of Little Rock had adopted a resolution to give “a free barbecue to the people of Pulaski County and as many others from the adjoining counties as can conveniently attend.”

A reporter for the Arkansas Intelligencer described an 1846 Fourth of July barbecue near Frog Bayou in northwest Arkansas this way: “The noble steer was immolated at this sacrifice — lambs, shoats and poultry sent up their quotas to this patriotic feast.”

It’s no easy task to settle on a single style of Arkansas barbecue. But, as you can see, the tradition of barbecue in this state is a long, rich one. In addition, we have Trio’s shrimp étouffée and French lentil soup to add variety to any autumn meal.