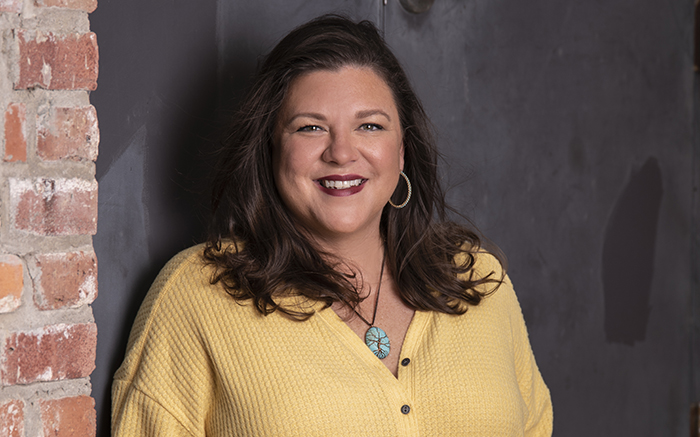 “When Oceans Rise, I will stand in your embrace.”

That song has long been a soundtrack to my life, introduced to me by my husband. When oceans rise in my life, I have found great relief in standing in the embrace of my God. But some days, it has been so much more difficult than others to remember that — to feel that.

My story is not easy to tell, but the goal is to share my “ocean” in hopes I can help others to the shore, to faith and hope. To all of those struggling with mental health and movement disorders and to their caretakers, I hope this narrative gives you strength to embrace those moments when everything is sinking and to seek intervention.

When I met my husband more than a decade ago, he was a wild card. I was the rule follower in the coupling. Cody Sublett was full of energy, enjoyed being in large crowds and working a room. He dressed for each occasion with careful abandon, making sure to highlight his quirky nature and “no-filter” spirit. His reputation for being brutally honest preceded him, and many times cringe-worthy to me, spurred a howling laughter and even respect from others.

I, on the other hand, was hyper-aware of social situations and “appropriateness.” I began taking care even then, reining him in when possible. However, where I was hesitant, he shined. When he needed what we now know as “behavior modification,” it was I who facilitated.

I look back on those early years of our relationship/marriage, and my head rattles with the constant battery of social stimulants — parties, dinners, events, volunteer opportunities — a revolving schedule of commitments. My career in local media kept me on a similar routine, the blend of both of our responsibilities was a lot. Plus, we had two young children to accommodate. 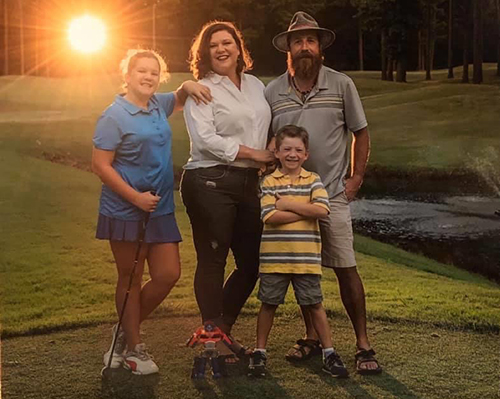 He was the king of grand gestures for friends, romantically with me and most assuredly with the children. Nothing was ever done halfway, although much was never completely finished.

Cody had dark days when he seemed to bottom out. Just as easily as he had an abundance of energy, he would fall asleep almost instantly. His moods were up and down with the same sporadic, random rhythm. And, the responsibility would end with me to pivot, change plans or explain an outburst.

By 2014-15, my husband (now in his late 20s) was working a state job he loved. He was a father of two beautiful children and a loving, very special husband. Because of the nature of our marriage at this point, we were connected, almost fused together. I knew his faults and frailties.

Cody developed a slight tremor in his right hand — we thought it was low blood sugar or some kind of nerve damage. It became a real problem quickly. He couldn’t do his job effectively (he worked as an autopsy tech at the state crime lab). He had trouble opening doors with a key, getting dressed and swallowing. His gait changed, his voice changed, his movement slowed. … We struggled to find answers. Eventually, after exhaustive examinations and tests, we landed with a neurologist who determined Cody was suffering from early-onset Parkinson’s disease.

That did not compute, but all the evidence was there — a host of nonmotor (emotional/mental) symptoms and physical symptoms that had been there for years. 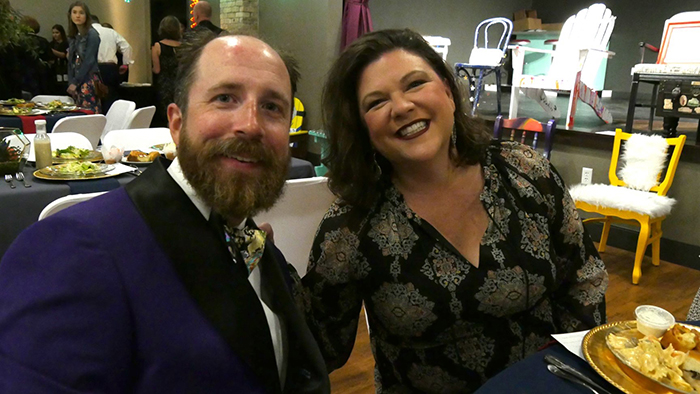 Parkinson’s disease usually is reserved for those over age 65. People diagnosed typically begin looking at the end of their lives — financially planning, retirement, long-term health care options, support groups composed of patients at all stages of the disease. … For us, the landscape looked so different. Cody wouldn’t be planning for the end of his life, but the middle part — the good part— the part when children play sports, graduate, get married, have their own children. For our marriage, only three years old at that point, our future would radically change, too.

I was so proud of my husband. He immediately agreed to medications and was open to exploring physical therapies. I became an avid researcher on Parkinson’s and was coping with the idea that my “good” life with him — river trips, bicycling, backyard games with my children — would all change or gradually end. And as difficult as that was for me, I cannot imagine what it meant to him — this larger-than-life character people so dearly loved.

I remember the day we put his bike in the rafters.

As a family activity, we biked through our town with a baby trailer and our oldest peddling a perfectly pink bike with fun tassels. We continued this practice almost daily after diagnosis until that first spring. In the middle of a ride, he kind of stuttered to a stop and got off the bike. He got back on and tried again but fell. It was the first big fall. (There would be many more.) He looked at me with big, sad eyes and said, “I can’t remember how my legs work.”

Things changed after that. 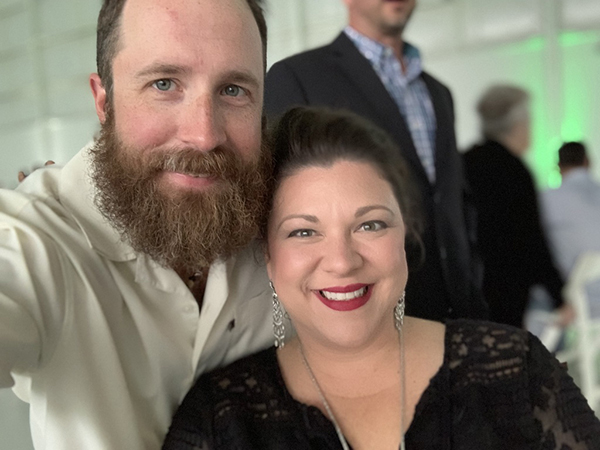 Over the next year, we modified our lives without seeking help from others. We hid his falls and his inability to do certain things when he was having an “off” period, like cutting up his own steak. I just figured out to serve it to him in pieces, laughing, “Well, I do it for the kids, I guess I just went ahead and took care of Cody’s! Silly me!”

As his wife, that’s how I dealt with our problem. I helped him hide when the medications and therapies were not working consistently. Cody knew how relationships would change and how his health would be pitied. He wouldn’t stand for that, so we joined hands and created an alternate universe outside our home. He started working out with a group of men who were incredible allies in the last few years. But, he drove his body to its breaking point. He would come home and fall apart, at times injured from his efforts. Cody tried so hard to be better every day, both physically and mentally. He never said no when someone asked him for help.

And that persona wasn’t easy on our marriage. He lacked the ability to spend that energy at home, and by not saying no to others, he whittled away precious time with us.

It seemed publicly he was overcoming, succeeding, but at home, he was struggling to function emotionally. He started a business, Cadron Creek Craftsman, and did well, so his public-facing self was convincing. As his caretaker — and I hate that word, but I have no better one — I made sure he was safe from any pity or from anyone expecting less from him. I was his mother as much as I was his wife. He needed both parts of me. That wasn’t easy. That wasn’t fair. 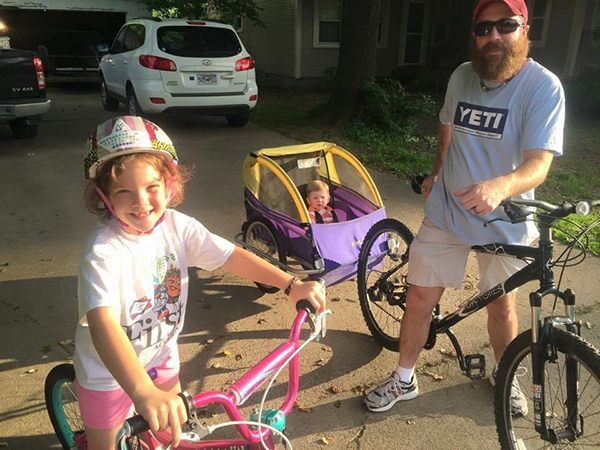 Cody received his diagnosis at a ridiculously young age. We, nor the medical community, have any real idea what causes Parkinson’s. There are assumptions, theories, and in some cases, genetics that medical professionals explore, but there is no cause. And right now, there is no cure.

One area of exploration that created another challenge was the idea that Cody’s symptoms could have been significantly influenced by his mental health, with professionals considering elements of a psychogenic movement disorder or worse — the beginnings of dementia.

A year after we put the bike away, Cody’s mental health became a big factor in this “new normal.” He was forgetting how to drive to places in the town he had frequented his whole life. He had trouble recalling names of people he grew up with, often interacting with them with a “Hello, brother!” or “Howya doin’, sister?”

We were referred to the University of Arkansas for Medical Sciences (UAMS) Movement Disorder Clinic and then to the UAMS Psychiatric Research Clinic as his cognition issues became more serious and took on a higher level of symptoms like hallucinations, both vocal and visual.

Cody fought to find a balance with medications and psychiatric help, but the struggle was regulating all the different functions of his prescriptions and dosages. For instance, he took synthetic dopamine to control his tremor. He also took meds for clinical depression and social anxiety disorder (which no one can wrap their minds around, but it certainly explains a lot to me) — two subsequent diagnoses that often come with Parkinson’s. He also saw a therapist weekly.

By May 2019, Cody had made a decision the rest of us would be made aware of much later. For the following six months, he began to slowly embrace his difficulties. He stopped taking his prescribed medications and hid the dosages I prepared for him daily. He only self-medicated with medicinal marijuana. If any of his social filters did exist way back in the beginning, they were obliterated at this point. His physical symptoms were showing back up at random.

As his caretaker, the decline was maddening. As his wife, the decline was painful and amplified the hurt. For me, it was playing whack-a-mole at warp speed, juggling a highly stressful career, our children’s needs, daily life responsibilities and all of his highs and lows along the way.

He left this life on his own terms, although that gives me very little peace. A faithful person, Cody made sure to leave behind messages describing that his affliction was not because God had forsaken him, but because he didn’t want to cause any more hurt for me or his children. He believed the lie in his head that he was not worthy of all the love and support and caretaking he would most likely need moving forward.

I cannot speak to how all of this should have ended or worked out in the future had he lived, and I cannot dwell on that. There’s a bigger part of me that is angry that we didn’t get to fight this thing, and now he’s left me with a lifetime of hurdles for his children. 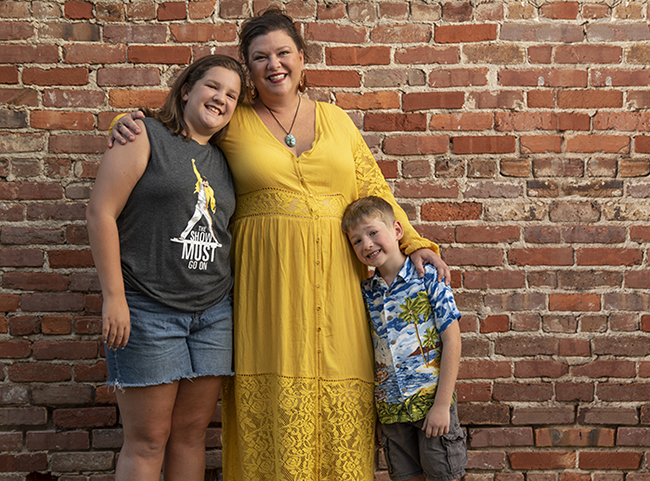 Kelly and her two children, Presley Kate and Keaton. (Photo by Jamison Mosley)

Dealing with a movement disorder is all-encompassing. It requires resolve and patience and preparedness for sometimes decades of physical and mental changes and pain that swallow up families and those caregiving. Research is essential. Every year, 60,000 Americans are diagnosed with Parkinson’s alone.

So to those suffering right now, I want you to quit hiding behind the idea that seeking help will put further strain on relationships or enhance perceived weakness. That pride is not worth your life or the life of your loved one. Arkansas has a wealth of experts studying mental health as it pertains to other diagnoses, and they are delivering resources in communities all over the state. I encourage you to reach out to your primary care physicians, your specialists, and let them know when you are struggling and exactly how you are struggling. They will get you help, regardless of your income or insurance situation.

As an almost 42-year-old widow — I hate that word, too — I am finally seeking my own mental health healing. After nearly a decade of taking care of someone else, it is my turn to take care of myself. There is no shame in this.

People are good, and they do care.

I leave you with part of a prayer Cody left behind, and I also pray his words find you.

“Help me to choose and see the good this week, God. I know that I can, and I know that it is all you and in you. Remove the things in me that distract me from you. Take it far away. I don’t want it, and I don’t need it. It’s awful. Make my heart pure and my actions noble. Make people see you in me so that all my life will be wrapped up in things that are good and only of your love. AMEN.”