Photography by Melissa
Imagine the life-changing words, “you have cancer” and then the bleak prospect of paying for housing while you seek treatment for radiation and chemotherapy. Since most of the state’s medical facilities are in central Arkansas, that is a real challenge both financially and emotionally for patients outside the area. That is why the 20th Century Club exists today.
On a quiet street south of the University of Arkansas for Medical Sciences (UAMS) and the Winthrop Rockefeller Cancer Institute lies a beautiful facility that looks like a nice extended-stay hotel. It is. Sort of. But at no cost to those cancer patients (and their caregivers) who qualify to stay there. The 20th Century Club began as a mission in the 1940s for assisting our servicemen during the second world war. It was 20 years later that the 20th Century Club began serving cancer patients. And it was in 2011 that the current facility on Maryland Avenue opened its impressive doors. 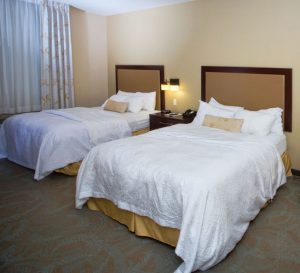 Executive Director Elizabeth Clogston proudly says, “We have served patients from all 75 Arkansas counties and 26 different states with zero cost to the patient.” The Club’s cost to provide this free housing is $50 a night. Clogston continues, “The Lodge serves people who live at least 40 miles from their treatment center and are receiving treatment at any central Arkansas medical facility. Each patient brings a caregiver. The average patient and caregiver stay is 40 nights, but over 20 percent of patients stay 50 nights or longer.”
The activities and fellowship are two hallmarks of what the 20th Century Club’s Lodge provides. Three nights a week a hot meal is enjoyed and served by the friendly volunteers, and one night a week is bingo night. A continental breakfast is available every day along with healthy snacks. The patient suites are luxurious with two beds, a breakfast area, microwave and refrigerator.

The 20th Century Club’s Hope Ball is an annual must-attend event for central Arkansans. It is a beautiful night of dinner, dancing and the presentation of the Hope Ball Angels. These are 11th-grade girls who have committed at least 25 hours of volunteer service to the organization. Each girl is escorted by her father or guardian and then has a father/daughter dance before the dancing gets underway. It is the only time the organization asks for money all year. This night is crucial to the financial support of the 20th Century Club. It is often a time when people who don’t attend still give financially through the “fund a night” portion of the evening. Donors give at least $50 to fund a night of housing at the Lodge. That often generates nearly $100,000 in donations to help with the tremendous cost for guests at the Lodge.
Where does hope live? It’s a question the volunteers are asked. For anyone who has stayed at the Lodge, they will tell you 4011 Maryland Avenue. It’s a 21st-century solution that began in the 20th century. And you can help with the financial needs of the Lodge by giving online to the organization on their website, hopeawayfromhome.org.