Where to Find Local Breweries in Arkansas 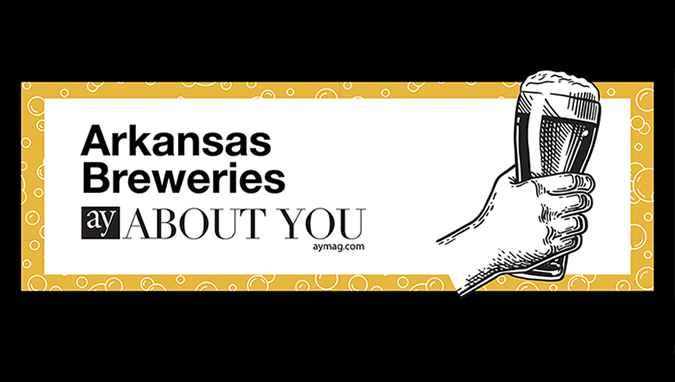 Cheers with beer in the Natural State! Just within the past decade, the number of craft breweries in Arkansas have grown significantly. According to the Brewers Association, there are nearly 40 in the state today compared to just six in 2011.

As International Beer Day approaches this Friday on August 7, AY wants to celebrate and share a list of local breweries in Arkansas with our readers to check out, grab a beer and relax.

Founded in 2015, Bentonville Brewing Company offers quality craft beer with a taproom and patio. There are also plenty of restaurants and stores in Northwest Arkansas that provide a selection of its beers like the Homewrecker IPA and Salted Cherry Sour Ale.

Bike Rack Brewing Company has three locations in Northwest Arkansas, each with a different feel. One of them, The Experiment, is considered Bentonville’s oldest brewery which opened its doors in October 2014. The main production takes place at its second location as part of the 8th Street Market. The third location in Springdale opened in 2018 where both beer and coffee are brewed.

Boston Mountain Brewing is located in midtown Fayetteville with a variety of handcrafted beers. Matt Thompson and Sam Grinceri opened the three-barrel brewhouse in July 2019 to serve local residents.

Located in Harrison, Brick & Forge Brew Works has brewmasters with over 25 years of experience combined to bring great beers on tap. Guests can enjoy beers like Dirty Sally, Peace Pipe and more.

Columbus House Brewery located in Fayetteville is currently a three-barrel brew house that opened in 2015. In fact, the brewery recently celebrated its five year anniversary with the release of the Red Card which is an imperial version of its Yellow Card Golden Ale that has been aged in a red wine barrel.

Since 2010, Core has been growing its beer presence in Arkansas and surrounding states. The brewery is located in Springdale and was even named the Official Craft Brewery of the Arkansas Razorbacks last year. It has a wide selection of choices including the Razorback Red, Arkansas Lager, Dickson St. IPA and more.

Located on the grounds of Subiaco Abbey, Country Monks Brewing has beers that are available for purchase to the public once a week in the taproom. It currently offers three Benedictine style brews including a Pale Ale, Abbey Amber and Stout. Profits go to the continuous care of the elder monastic brothers in the health center.

Crisis Brewing in Fayetteville opened in 2018 to serve small-batch brewed beer. There are several choices on tap for guests to enjoy in the taproom. It recently released the All Time Low light Pilsner and fruity Brut IPA.

Founded in 2000 by Sue and Russ Melton, Diamond Bear Brewing Company was Little Rock’s first production brewery in 15 years. It has grown into an award-winning brewery that offers a terrific selection of beers.

Eureka Springs Brewery is owned by a father-son duo that has 10 beers on tap. Make your way up to the brewery and find the beer garden along with a nine-hole disc golf course. Try the Hazy IPA or Toasted Coconut Brown Ale.

Flyway Brewing is a 10 barrel microbrewery located in the Argenta Arts District of North Little Rock. It has a special tasting room with 12 beers on tap including Carrot Cake Imperial Golden Ale, Honeybird Blonde Ale and Bluewing Berry Wheat. However, the company has transitioned to provide service outside amid COVID-19.

Located in a 10,000 square-foot facility on historic Fort Chaffee, Fort Smith Brewing Company has been serving handcrafted beers since 2017. The company has grown to a seven-barrel system and features 62 beers on tap including its own recipes along with brews from other local breweries.

Fossil Cove Brewing has 13 rotating taps including year-round, seasonal and experimental beers for guests to enjoy in Fayetteville. Stop by the tasting room and try one of their delicious brews.

With nearly 30 years of brewing experience, Dave Hartmann recently opened Gotahold Brewing in Eureka Springs. There are eight beers on tap including its newest brew the Tractor Ride, a crushable dry-hopped Pilsner.

Although Gravity BrewWorks opened in 2013, owners Bill Riffle and Tony Guinn have been homebrewers since 1980. It was one of the first rural breweries in the state located in Big Flat. There are more than 10 options to choose from, with tastings and flights available as well.

Hawk Moth Brewing is a small batch brewery and beer parlor in Rogers that focuses on barrel aging and blending. With a custom-made foeder, the brewery makes several different handcrafted beers.

Located in Siloam Springs, Ivory Bill Brewing Co. offers 10 different beer options. Relax and unwind with one of its beers on the patio. Try the Apricot Sour which is the newest creation made with apricots from New Mexico and a neutral oak barrel of sour wheat beer.

JJ’s Beer Garden & Brewing Co. has a 225-seat dining room where guests can see the brewing process through glass windows. There are even scheduled tours available at the 12,000 square-foot brewery and restaurant located in the uptown district of Fayetteville.

Natural State Beer Company opened its doors in Rogers on November 23, 2019 and quickly gained popularity. It has a taproom and outdoor patio with beautiful views over a pond for patrons to relax while sipping on a beer. There are eight choices available regularly and four rotating seasonal beers.

New Province Brewing Company is a craft brewery and taproom located in Rogers that opened in 2016. They serve a variety of choices including the Commoner American Cream Ale, Space Suit Session Ale, Fallen Queen and more.

Using wild and natural ingredients, Norfork Brewing Company brews a variety of beers and serves them to those near the Ozark Mountains. Enjoy a cold beer in the taproom where the selection changes frequently.

Ox Bend Brewing Company is a small brewery with a selection of eight different craft beers. If you are ever in Ozark, stop by to try one of their beers on tap. Its newest brew release is the Rhinestone Cowboy Cream Ale.

Mountain Home’s first brewery and taproom came along in September 2017 when Rapp’s Barren Brewing Company opened. There are more than 10 beers on tap to enjoy. It was recently announced that the company will be moving to the Mountain Home Entertainment District in the Baker Building after renovations are complete, hopefully by spring of 2021. The expansion will allow Rapp’s Barren to switch from a one-barrel to a five-barrel brewery.

Rendezvous Junction Brewing has been “crafting beer that brings taste and buds together” since 2016 in Rogers. The two men behind the company are Mike Peerson and his son-in-law Levi Taylor who started working on it after a trip to New Belgium Brewing Co. in Fort Collins, Colorado. Today, they have more than 70 unique recipes for craft beer.

Located on a 30-acre farm just five minutes from Springdale and Fayetteville, Saddlebock Brewery was opened by Steve Rehbock in 2011 to bring craft beer to Northwest Arkansas. The craft beers are brewed in small batches with a sophisticated, multi-stage water filtration system as well as premium quality grains and hops.

Near the Caddo River in Amity is Slate Rock Brewing where Clark County residents and others can drink locally brewed craft beer. The brewery has several beers on tap in its relaxed taproom and even offers keg rentals.

SQZBX, also known as squeezebox, is a family-owned and operated brewery and pizza joint in Hot Springs. Zac Smith and Cheryl Roorda opened SQZBX in 2017 to serve hand-tossed pizza and German-style beers brewed with malt, hops, yeast and water.

With two locations in Little Rock, Stone’s Throw Brewing has a wide variety of choices on tap that caters to all beer lovers. Theron Cash, Brad McLaurin, Shawn Tobin and Ian Beard are the owners who met in the local homebrew club, the Central Arkansas Fermenters, and turned their beer dream into reality. They offer year-round, seasonal and limited releases of craft beer.

StudDuck Beers is one of the more remote breweries in Arkansas located in Lonsdale. Owners Brad Bassett and Jerry Luckett repurposed two shipping containers to create a unique brewery and taproom that opened last year. There are seven beers offered on tap all year round.

Superior Bathhouse Brewery located in Hot Springs is not only the first brewery in a United States National Park, but also the first to use thermal spring water in its brewing process for beer.  With 18 taps of original beer, there are plenty of choices to find a new favorite!

Vino’s has been serving Little Rock a great selection of beer and pizza since the 1990s. The handcrafted beers are brewed fresh without chemicals or preservatives. The Six Bridges Cream Ale, Pinnacle IPA and Lazyboy Stout are a few of the most popular beers.

Located in the historic downtown square of Fayetteville, West Mountain Brewing is one of the oldest breweries in Northwest Arkansas. It offers various beers from classic IPAs to stouts, lagers, brown ales and more. Tiny Tim’s Pizza is right next door for those who want a snack as well. 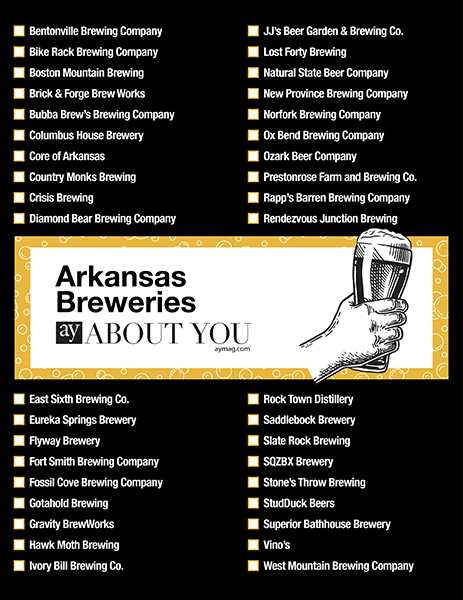