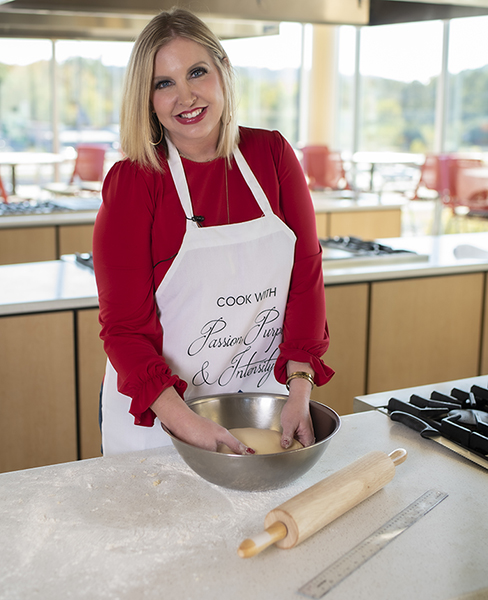 “I am not a baker,” AY Media Group publisher Heather Baker jokes as she removes her jewelry to prepare for an afternoon of being wrist deep in cinnamon roll dough. “Just warning ya’ll now.”

The warning is appreciated, because our art director, Jamison Mosley and videographer, Josh Throne, and I came to this event for two reasons: to work and eat fresh-baked cinnamon rolls. Mostly the latter.

Baker has enlisted herself in a cinnamon roll cooking class, courtesy of our friends in the culinary arts department at the University of Arkansas-Pulaski Technical College (UAPTC).

Fortunately for us in that moment of crumb-ling realization — that our esteemed publisher may not be able to pull this off — the professionals came prepared.

Chefs Wendy Schay and Chocla Lea are the only masterminds in the room, at least as it pertains to the culinary arts. Schay is a former nurse, who started taking culinary classes part-time in 2013. She earned an associate of applied sciences from both UAPTC and the University of Arkansas at Little Rock and is a certified executive pastry chef from the American Culinary Federation. She began teaching classes herself at UAPTC in 2015. Lea is also keeping us in line, as one of UAPTC’s baking instructors, a full-time role that she began earlier this year. 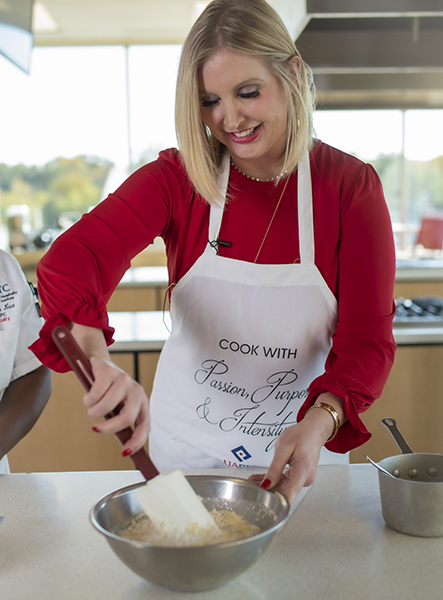 Schay and Lea were kind enough to have multiple batches of cinnamon rolls already prepared for our arrival. So, given the ominous self-admission of not being a “baker” by the only person in the room with the last name “Baker,” the rest of us are forking spirals of cinnamon goodness into our mouths now, just in case the ones that come later do not pan out.

The ladies have everything ready for Baker to succeed. All the necessary ingredients are laid out, premeasured, and they both assure her (and us) that they will be coaching her every step of the way. Consummate professionals. They’ve done this before. 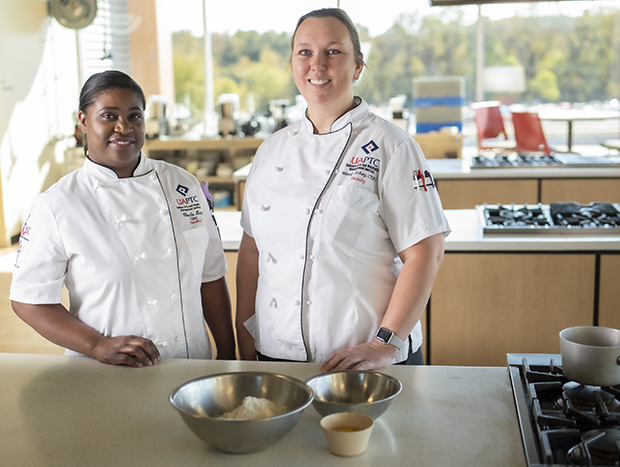 “We will see about that,” I think to myself before Baker takes the words right out of my head. “I’ll say it again, I am not a baker,” Baker’s recurring joke from the day. A thought does occur to me that she might, in fact, be sandbagging us. You see, her daughter Savvy is a remarkable baker, more than living up to the family name in the kitchen. Just 12-years-old, she has already taken numerous cooking classes for years, both at UAPTC and the Clinton Culinary Camp. It strikes me as odd that Heather has gone this long without picking up any tricks-of-the-trade from her daughter. A sliver of optimism. She can probably bake.

Then, a glorious epiphany appears to the Baker before us and washes over everyone in the room as a swell of hope. “There’s no baking powder in this recipe!” Baker exclaims. “I hate baking powder and baking soda.” 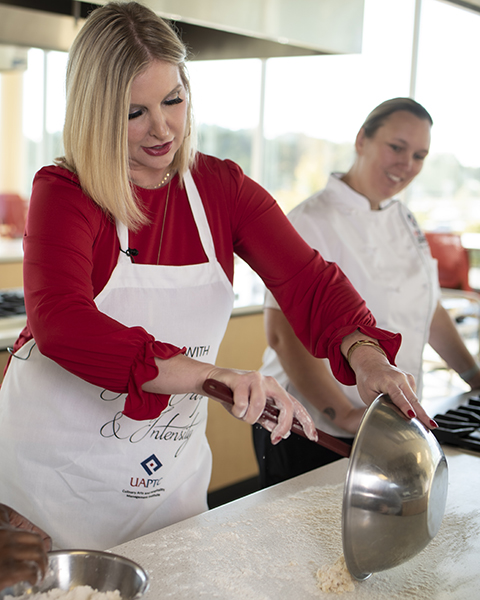 The two chefs nod their heads in unison, lips curling into smiles.

I digress, and so does Baker. No more stalling. Down to business.

She adorns herself in a white apron and attacks the first station. Mixing. Her mentors for the day are ready, carefully instructing at every step. After Baker gets all of the ingredients combined, even more confidence begins to build up. The mound now sitting before her is a legitimate-looking dough. 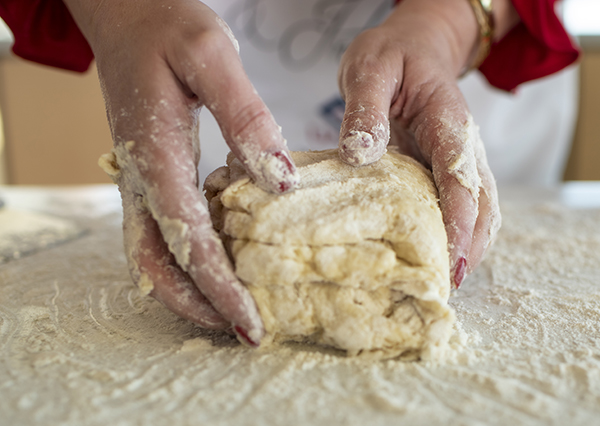 At the direction of the chefs, Baker liberally dusts the surface of her workspace with flour and plops her dough atop the wintery looking landscape. She digs her knuckles deep into the dough, kneading it ever so gently, and definitely glad that her wedding band is sitting safe-and-sound on the table to her left.

“I don’t want to mess it up,” Baker says behind a laugh, slowly beginning to press a little harder into the dough.

After a few minutes of kneading, the two chefs divulge an expert tip to Baker. Press into the dough with your thumb. If it does not immediately bounce back, more kneading is required. They explain that the elasticity means that the gluten is forming, which is what we are looking for. 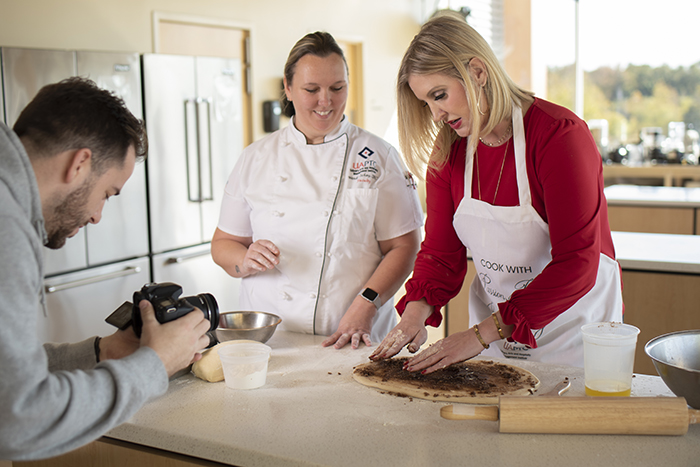 A few more rounds of kneading and pressing pass and the dough is ready for proofing for the gluten to finish forming. This is also when the dough will rise to about double its current size. Generally, this proofing is best over a span of an hour or more, giving it plenty of time to breath and become all it was meant to be — delicious.

After the dough is finished proofing and ready for rolling, the chefs give Baker the option between jumbo rolls and regular-sized.

She rolls and presses the balled dough out to form a large rectangle, and then begins preparing her filling. It turns out to be one of the simplest steps thus far; a concoction of butter and cinnamon-sugar mixed together to form a paste-like substance, which is generously and evenly applied to the surface of the flattened dough. Baker then rolls it up like an enchilada and the familiar spiral of dough and cinnamon filling starts to show. All that’s left now is cutting the now tubular dough into individual cinnamon rolls. And since she is making jumbo-sized portions, the slicing is few and far between, making them as large as is feasible.

Another round of proofing for the individual rolls is required. Baker suggests that if these rolls are your plans for Christmas morning breakfast, let this last proof happen overnight on Christmas Eve so that when you and your loved ones wake up, the only thing left is the oven.

Speaking of the oven, the chefs allow us in on another secret to take our cinnamon rolls to the next level. Before placing the cinnamon rolls on the baking pan, sprinkle a cinnamon-sugar mixture onto the pan for the rolls to rest on. This will give them a nice extra flavor boost, as well as a subtle, additional texture profile.

The entire facility is now filled with the recognizable aroma of cinnamon rolls. We still do not know what Baker’s taste like, but the smell is the real deal. She pops the rolls out of the oven and begins icing them with a from-scratch topping the UAPTC gals helped her whip up. Time for the moment of truth. How do the Baker rolls compare with the professionals’?

“Savvy would be so proud of me,” Baker says with a mouthful of cinnamon roll.

Never one to turn down a free bite, I take one for myself. Throne and Mosley follow suit. We all look to the other apprehensively. 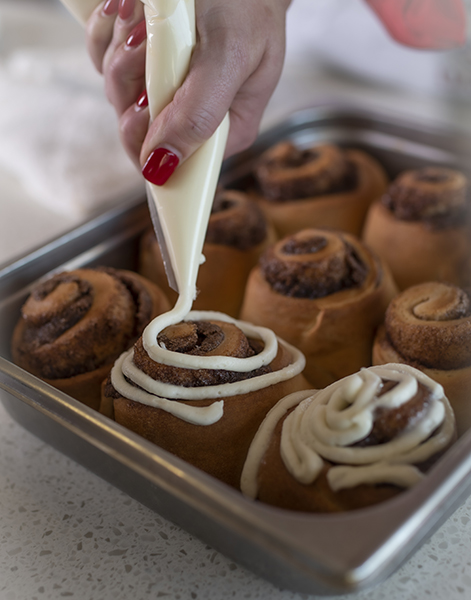 This is ..…Actually delicious.

That’s it. I’m sold. Heather Baker is a baker. At least, she can play one fairly seamlessly on the right day, with the right crew. No offense to the boss lady, but the first rolls of the day, made by Lea and Schay, do take the cake. But the fact that hers held their own against that of full-time culinary instructors is impressive, indeed.

Want to get in on the fun yourself? Schay and Lea offer a number of cooking classes that anyone can partake in, including those for cinnamon rolls, croissants, sourdough bread, macarons and sugar cookies. Check out their Facebook page for class times and availablity.