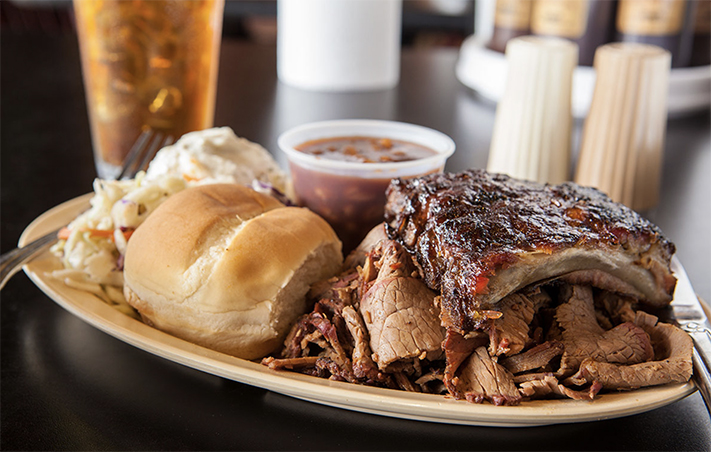 The beloved barbecue staple is moving to the former Applebee’s Grill + Bar, located at 4333 Warden Road in North Little Rock, later this spring. According to owner Daniel Bryant, the move all comes down to space. “We just need more room, and this is going to allow people to get in and out a lot easier and park closer to the door,” he said.

Whole Hog Café North Little Rock has been located at its current location, just down the road at 5107 Warden Road, for more than 10 years.

Both Bryant and Cosgrove highlighted a major feature of the new restaurant: expanded outdoor seating. With the new spot, Whole Café Hog North Little Rock will be getting a large covered patio that will have heating for cold days and two sets of door to allow for “plenty of airflow,” according to Cosgrove.

As for the food, Bryant plans to keep the restaurant’s winning formula. Adopting a ‘if it ain’t broke, don’t fix it policy,’ he will keep Whole Hog serving up its famous barbecue and meats, rather than rebooting the restaurant.

“We’re not going to be doing anything revolutionary. Whole Hog has been making great barbecue for a long time. I know that a lot of places think that limited time offers and changing the menu up is good for them, but frankly, I just don’t think that barbecue is one of those things. You know, you get the right cook and the right blend and cook time and all of that, and you just don’t fool with it,” he said.

“I would classify it as ‘if it ain’t broke, don’t fix it.’ And nothing’s broken.”

The interior will largely remain the same, as well, at the new location. Bryant emphasized that Whole Hog Café will continue to pay tribute to the Jacksonville Air Force Base and those who serve there. At the current location, the front room is dedicated to the base, and Bryant said this is expected to move with them.

“We want to keep the appearance of the place simple like the food,” he said. “We’re still an independent restaurant, and that’s the way we want it.”

Reflecting back on the past year, Bryant acknowledged it has been difficult for Whole Hog and the industry at large, but he praised his partners, Cosgrove and Nancy Green, for their work as well as the commitment of the staff, noting that they banded together and continued working throughout the arduous year.

“Relative to a lot of places, we’re doing really well and, we feel very fortunate,” he said. “There’s a lot of people who really suffered and some of them don’t even have their businesses anymore. It’s a tough slog but, we’re still here, so we’re happy.”

Even with the increased opening in Arkansas, Whole Hog has been maintaining significant COVID-19 precautions, remaining at two-thirds capacity for now. “Nancy and Rich, my partners, have been very diligent about that. We’ve not pushed it at all,” Bryant said. “We’ve probably held back more so than we’ve had to…we would [rather] be safe than sorry.”

However, the restaurant has seen a pick-up in business, with more catering and corporate lunches returning, as well as increased restaurant traffic.

Now, it’s just a matter of getting into the new building, which they have bought and own. Bryant expects to open in May and wants it to be the same great experience that customers have always experienced at Whole Hog Café North Little Rock. “There’s no room for error anymore,” he said.

READ MORE: The Humble Tamale: Where to Get Them in Arkansas