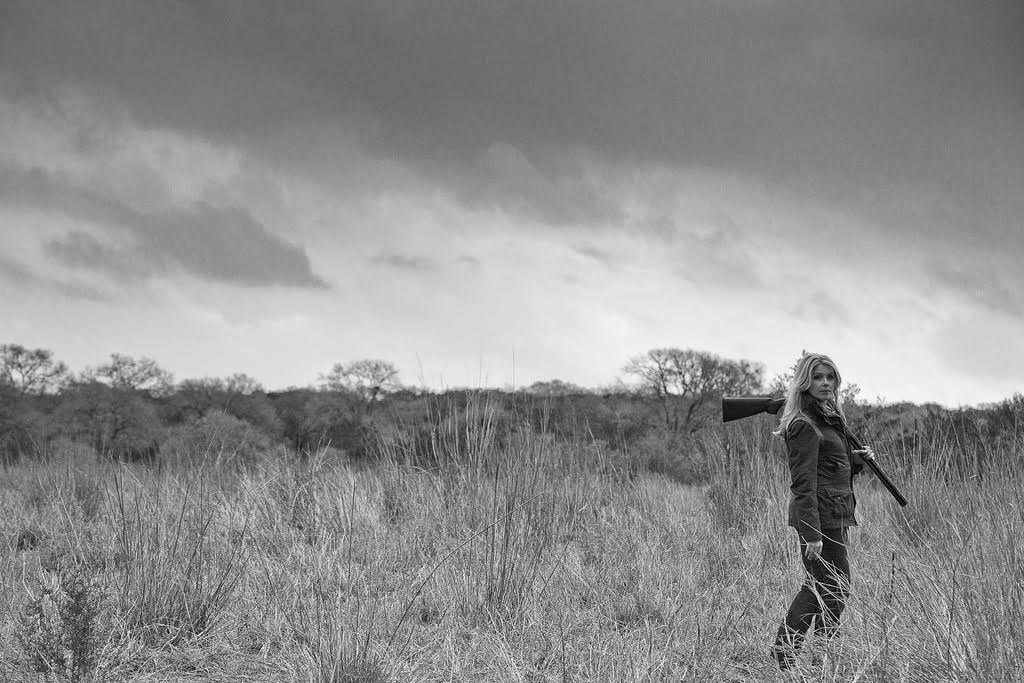 [dropcap]G[/dropcap]eorgia Pellegrini will come to Arkansas to hunt and cook — but it will be far from her first time in Arkansas.

Pellegrini is a bestselling author, popular blogger, trained chef and, perhaps most importantly, woman hunter. She has written three books: Food Heroes, Girl Hunter and Modern Pioneering: More Than 150 Recipes, Projects and Skills for a Self-Sufficient Life. She writes for her own website, georgiapellegrini.com, which garners more than 2 million visitors per month, and for national publications like the Wall Street Journal.

On her blog she tells stories of her own travels, shares recipes and projects, and profiles American craftsmen and women in her “Meet the Modern Pioneers” series. Arkansans Jack Lloyd of Dower handbags, Historic Arkansas Museum blacksmith Lin Rhea and Brooks and Shannon of Electric Ghost Screen Printing have all been featured in the series.

Pellegrini has also appeared on numerous TV shows, including Iron Chef America, the Today Show, Jimmy Kimmel, The Chew and Martha Stewart and was named one of 2015’s 10 Most Influential Outdoorswomen by Wide Open Spaces.

AY Magazine is Pellegrini’s media partner for the same reason she’ll be in the Natural State: her first-ever Arkansas Adventure Getaway. Though this is the first getaway she’s held here, the action-packed weekend won’t be her first visit to our neck of the woods this year. Pellegrini was profiled in our April 2017 issue when she was a speaker and celebrity guest at the annual Baptist Health Bolo Bash Luncheon.

LIVING OFF THE LAND

Pellegrini grew up in New York state. Her book Girl Hunter tells the story of her life and the year she spent learning about nature and how to hunt, her early life living close to the land and growing up and growing apart from it.

As a child, Pellegrini foraged and fished, weaving through the New York woods. As she grew older, she became a city girl; she traded her fishing pole for concrete and crosswalks and entered a popular preparatory school. The wild child was tamed at the Manhattan prep school, and the woman went on to college and a career at Lehman Brothers.

She left Wall Street to learn to become a chef. After attending the French Culinary Institute in New York, she worked at farm-to-table restaurants in the Big Apple and in France.
“It was a very organic thing to make that move,” says Pellegrini. “I became a chef after I left the corporate world, and I wanted to get back to the land and have a full connection to it.”

Her love for food and need for a connection with nature eventually carried her to Arkansas.

While working in a New York farm-to-table restaurant, she came face to face with her food when a commanding chef ordered her to go outside and kill a turkey. This encounter led to a desire to know more about the animals that would end up on her table, and to become more involved in the path they took to her plate. So she decided she wanted to hunt.

Pellegrini’s first hunt was in the Arkansas Delta, a place she returns to every year.

Her initial hunt of the year takes place in southeast Arkansas during dove season, deep in the country near towns like Lake Village and McGehee. In her book, she tells the story of learning to hunt; how men from the Delta, including a former Arkansas Game and Fish Commissioner, taught her what to do and how to shoot during long hours in the wild.

Pellegrini’s education didn’t end after she left Arkansas. People, mostly men, from states like Montana and Texas taught her the ins and outs of hunting all kinds of different game.

“For me, as a chef, it’s all about food, what I can cook and make delicious and about the people you’re with in that moment,” she told AY earlier this year. “In Arkansas I have hunted wild boar, deer, squirrel, which is some of the best meat in the woods, dove and obviously duck — after all, it is the duck capital of the world. There’s such a diversity of game in Arkansas, which is unusual for most states.”
She now calls Austin, Texas home, but she travels the world, hunting, gathering and tasting.

At the time this article was being written, Pellegrini was in east-central France. She told the Chicago Tribune in 2014 that her five favorite cities are Austin, Texas; San Remy, France; Vienna, Austria; Siena, Italy; and Lake Village, Arkansas.

During this fall’s visit to Arkansas, Pellegrini will be the teacher instead of the student; she’s bringing 16 women from all over the country to stay at the luxurious Capital Hotel, then to get out and get dirty in the field and the woods. The event, which will take place from September 21 to September 24, quickly sold out.

When the women venture outside Arkansas’ capital city, they’ll drive down to the Delta, a region of “legendary history,” a place embedded in Southern literature and beloved by Pellegrini. It’s where she says she first fell in love with hunting — so much so that it fills the pages of her book Girl Hunter.

Pellegrini created Adventure Getaways to give other women a way to experience the joy of hunting and the feeling of connecting with your food and with nature.

The Arkansas Game and Fish Commission (AGFC), which provided the survey statistics, has been involved with some of the planning for Pellegrini’s Arkansas Adventure Getaway, AGFC Marketing Coordinator Spencer Griffith says.

“The ladies will be taking part in some shooting practice at our range near Mayflower,” says Griffith. “Over the course of the morning, they will be shooting skeet, trap, pistols and archery.”

AGFC Watchable Wildlife Coordinator Kirsten Bartlow will also take the women paddling on a water trail on the Little Maumelle River near Pinnacle Mountain, Griffith said. The women will be able to fish and learn about local wildlife during the boat trip.

During the Adventure Getaways, women split their time between the wild and the domestic. Outside, they hunt and fish. Inside, they might learn to clean and cook the animals they caught earlier in the day or take part in classes to learn different skills.
“We help you expand your limits and maximize your potential,” says Pellegrini. “We help you challenge yourself to step outside your comfort zone in a comfortable setting. It is the perfect opportunity to transform body, mind and soul and make memories with like-minded people who will become a network of lifelong friends — no matter your experience level.”

Pellegrini doesn’t want women to fit themselves into tiny boxes; she wants to help women “make that box explode,” she says. The excursions are engineered to teach women “new outdoor skills” and give them a weekend they’ll “never forget.”

Elizabeth Michael, formerly of Lake Village and now of Little Rock, attended Pellegrini’s Adventure Getaway in Texas Hill Country. Her father, Paul Michael, was one of the men who taught Pellegrini how to hunt 10 years ago. Michael herself had only been hunting once before going on the Adventure Getaway.

She decided to try hunting again, years later, with Pellegrini, because the environment of the getaway was different than that of a normal hunting trip; for one thing, it wasn’t populated solely by men.

A few years ago, Michael was a vegetarian. She grew more interested in where her food came from (and started eating meat again), which led to her joining Pellegrini on the Texas trip.

“I wasn’t committed to hunting before I came, but I got more comfortable and decided to go,” she says.

During the getaway, the women “harvested deer for wildlife management,” Michael recalls. Some of the women brought their own guns, while Michael borrowed one.

Before they went out shooting, the women went through hunter etiquette and safety classes. They each got a “personalized experience with a hunting guide,” during outings and hunted in shifts throughout the four-day experience. When they weren’t out hunting, they learned how to process, store and prepare food, mostly deer and hog.

They also learned how to field dress the animals.

“It was very tactile,” Michael says. “We did everything with our hands or tools you would have in the field.”

Outdoor sessions during the getaway included falconry and foraging classes. And if given the opportunity, Michael says she’d “totally” go again.
“If anyone is interested in the outdoors in general they should go because you learn so much. It’s kind of an eye-opening experience.”

“This is a chance to try new things with abandon, laugh until it hurts and support each other in the process,” Pellegrini says of the Adventure Getaways. “We have all skill levels on a given trip and there are opportunities to expand your limits and maximize your potential no matter what.” 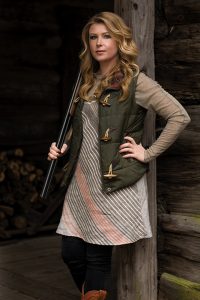 Pellegrini stands on the porch of the Plum Bayou Log House at the Historic Arkansas Museum in downtown Little Rock. Photo by Jamison Mosley