Over a century ago, on July 28, 1919, Arkansas became the twelfth state to ratify the 19th Amendment — the monumental piece of legislation that gave women the right to vote. On Oct. 10, 2019, a sculpture portraying some of the most prominent leaders of the women’s suffrage movement was added to Little Rock’s Vogel Schwartz Sculpture Garden in Riverfront Park to honor the 100th anniversary of the state’s decision to support women’s right to vote.

The sculpture, “Every Word We Utter”, and the plaza where it will be located, were unveiled at a dedication ceremony that took place at 11 a.m. on Oct. 10, following short speeches from Little Rock Mayor Frank Scott Jr., Gov. Asa Hutchinson, Sculpture at the River Market’s board president Jane Rogers, and the sculpture’s artist, Jane DeDecker. 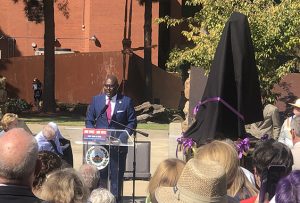 DeDecker’s sculpture is based on the concept of a droplet of water, called the daughter droplet, falling into the water, gaining height, and then returning to the water in a coalescent cascade. In “Every Word We Utter”, Elizabeth Cady Stanton and Susan B. Anthony — major figures in the suffrage movement — are standing at the bottom of the sculpture, and nearby are Stanton’s daughter, the young Harriet Stanton Blatch, and Sojourner Truth. At the top of the sculpture, the “daughters” — those who were vital in the ratification of the nineteenth amendment — are represented by Ida B. Wells and Alice Paul, both holding a flag. Their elevation is meant to symbolize the way these women were elevated by what came before. The entire sculpture is cast in bronze.

“The women at the bottom fought for the right to vote but never got to,” DeDecker said to the attendees at the unveiling. 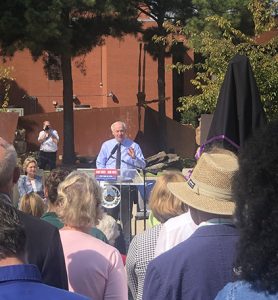 Those who are familiar with the course of history may remember that the 19th amendment was a catalyst for many social justice movements that followed. At the unveiling, Scott, who is also Little Rock’s first elected African-American mayor, talked about how the monument is special to him personally.

“The 19th amendment was not the final step .. But we understand that Without that step, we would have never had the civil rights movement, and the civil rights movement would have been a step harder. So, we are grateful for the women who stood up to make sure their voices were heard because by having their voices heard, it made sure that my ancestors’ voices were heard as well,” Scott said.

The Sculpture at the River Market, which collected funds for the project, encouraged donors to designate gifts in honor or memory of Arkansas suffragists or specific women. Those who donated $1,000 or more were recognized on a plaque in the new plaza. 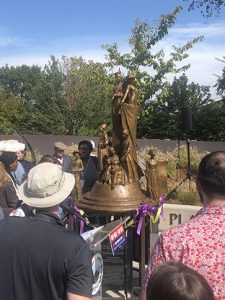 “Every Word We Utter” statue

“Because Little Rock was the site of much of the women’s suffrage activity, we felt it was appropriate to have a permanent reminder here in the Capital City,” Jane Rogers, of Sculpture at the River Market, said in a statement.