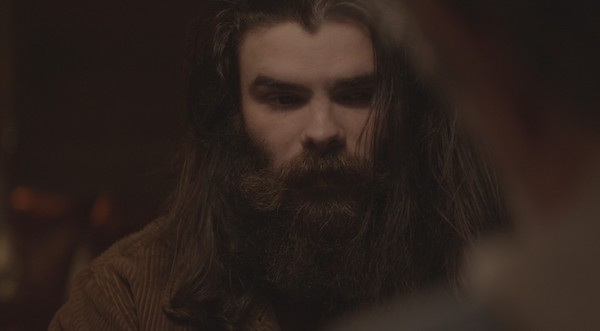 In the fall of 2021, a 22-year-old from a small town in northeast Arkansas made a monumental step in their career. Noah Arthur Woods, writer, director, editor and producer, won the Audience Award for Favorite Feature at Filmland: Arkansas for their original film The Lights are Closed and My Eyes are Dark. Following the story of people in love, drugs, paranoia and unpredictable life, Woods’ film will show at the CALS Ron Robinson Theater on Wednesday, April 20, with a Q&A with Woods to follow.

Who is this up-and-coming creative? According to Woods, this journey all began in that small northeastern town with a camera and DVDs.

“In my early teens, my brother picked up a camera and started doing photography, so when I was growing up I was always around him with cameras,” Woods shares. “Then during my summers, I would do different jobs like yard work to get money to go to Best Buy and just buy movies. I would spend a lot of time watching movies, and I eventually kind of realized that people did that for a living.”

Since considering film-making as a career possibility, Woods went to school to study film. Along the way, they found their style in writing, directing and building stories that captivate audiences, just as The Lights are Closed and My Eyes are Dark has.

“I usually write my own work — all the things that I’ve directed or plan to direct,” Woods says. “My style is I write what I want to write. I like to work with my actors in such a way that they’re also writing in their own heads, and I give them the creative ability to go off of what I wrote and do whatever they want. There’s a lot of involvement and writing the script even as we’re shooting [the film].”

Woods describes their style of writing as anxiety-driven and personal. They draw upon the rawness of life for inspiration. The Lights are Closed and My Eyes are Dark has been a work in progress for a couple of years, as Woods and their team kept reworking and building the story until they all believed that it was complete. 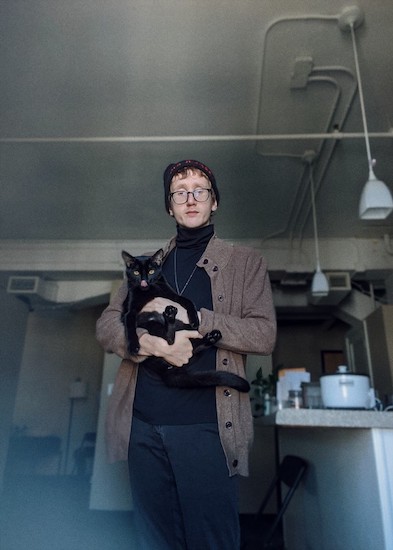 “I began writing [the film] in 2019 as a short film that I did for my film class. I was coming out of a dark place, so I started writing themes and elements and images that spoke to me a lot at the time. I got a good crew together and we knocked it out in a couple of days. [Making the film] was really emotionally draining and electrifying for me and for the actors specifically. After it had screened for class, I wasn’t really fulfilled, nor were the actors. They said, ‘There’s so much more that these characters could do, and there’s so much I wish I had done differently.’ So I got with them to start writing more, and after a couple of months, the film started becoming a feature-length project,” Woods says. “Then COVID-19 hit, and we didn’t really know what to do. We started filming in small little bite-sized pieces over the course of two years. We basically filmed five short films, and I didn’t let anyone know that it was a feature-length project until after I had gotten everything edited together. Now, it’s out there in the world. Finally.

“Even though I’ve done some stuff before this, I would say this is the first thing that I’ve done where I am confident this is 100 percent. What I envisioned, the essence of what I was going for, it’s translated in such a way that I’m like, yeah, that’s what I and my team did,” Woods says. “I’m proud of the collaboration in the team and everything coming together because [the film] is a very personal story to me, and the process of making it was mentally disruptive but in a very therapeutic sort of way. This is one of those things where we’re coming from a very dark place, but in the end, it was for a good reason; and that’s kind of what this project did for all of us I think.”

After winning the Audience Award, Woods recalls feeling overwhelmed by the recognition and happy for the people that were involved in the project. The award meant everything to Woods, the actors and crew members after the two-year journey they endured with the story. Being able to watch the film on the big screen for the first time will also feel like an award to Woods and their team.

“I think this will be the first time that [the film] will be screened in its full length publicly. [The film] was online, but I feel like this movie deserves to be seen in the theater with people and allowed a sound system. Watching on a computer or a phone is not the same or the feeling of what I was going for where I hope that the theater grants the audience. This is a very anxious movie, a very raw ingredient movie,” Woods shares. “I’m going to be there and have fun with it.”

Along the way, Woods has found themself influenced by the work of John Cassavetes, the Safdie brothers and the emotion behind impression paintings. The young film writer/director/editor/producer also finds inspiration from professors, peers and friends right here in Arkansas.

“I definitely want to continue creating in Arkansas. I think there’s a lot of untapped potential here, and I would love to be on the cusp of greatness in Arkansas with actors, musicians and the community that we could build here,” Woods says. “There is a lot of beauty in this state that hasn’t been seen before, and so I guess my trajectory is to continue showcasing Arkansas people and Southern life.”

The screening of The Lights are Closed and My Eyes are Dark will begin on April 20 at 7 p.m. at the CALS Ron Robinson Theater. The synopsis of the film states, “Henry, a helpless drug dealer, weaves through dark streets and the memories of his past while the acid he sold to a friend ends up dismantling Rocco and company into a hellish non-linear trip.”

“I hope that [the film] is something that people haven’t seen before or felt before. Especially this being something that I did in film school, I hope people are there to learn as much as I am in the industry.”

More projects are on the horizon for Woods following the screening of their film. Woods encourages people to stay tuned for their next works, follow their projects on social media and consider donating to their crowdfunding campaign to support their upcoming personal film I Do This for a Living.